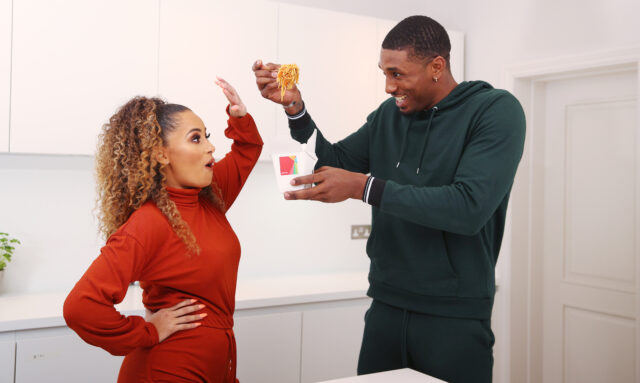 Love Island stars Amber and Ovie have been reunited over a candlelit dinner ahead of the new winter series airing this weekend.

The pair, who became firm friends in the villa, got cosy over a takeaway from new Love Island headline sponsor Just Eat. They also tried their hand at being Just Eat delivery drivers, in preparation for making a special delivery to fans at an exclusive Just Eat x Love Island ‘Ultimate Date Night’ event taking place in London, in February.

Amber and Ovie have been enlisted as Just Eat’s Love Island Insiders and will be sharing their reactions to the new Islanders when the series airs on Sunday 12th January. They will also be dishing out their expert advice on how the islanders can succeed in their quest for love in the villa.

The 2019 Love Island winner, Amber Gill, said: “It’s so much fun to be reunited with Ovie, we both get on so well and always have such a laugh. I can’t wait to get stuck in to the new series of Love Island with him, and see what the new villa and islanders have to offer.”

Ovie Soko added: “We had such a laugh practising being Just Eat delivery drivers, though I think they need to make a bigger bike for me! I’m looking forward to seeing more of Amber and watching how the new islanders get on together.”

How to choose the best watch and jewellery for females

How To Travel The World And Make Money according to Carly...

Inside Father’s Day at Boxpark Shoreditch