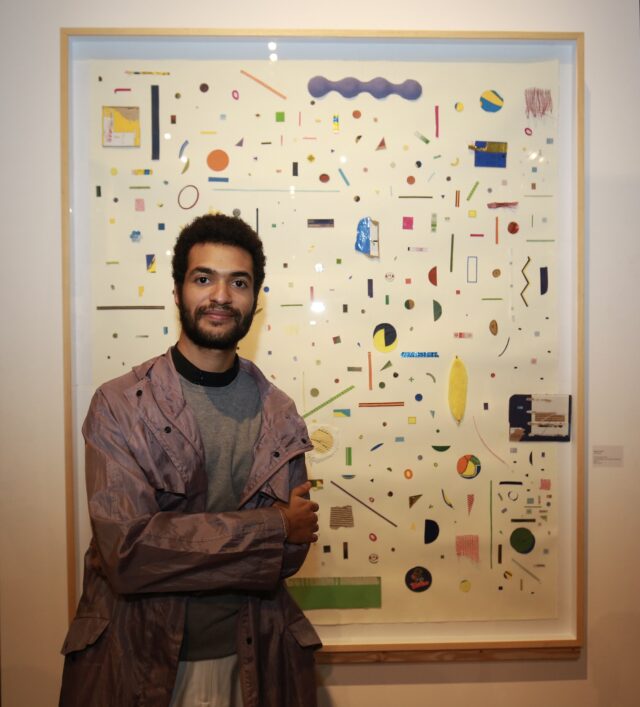 Brazilian artist Antonio Társis with the fifth VIA Arts Prize for his collage Coloured Export reflecting on immigration and globalisation.

The Brazilian-born Társis extracts fragments, colours and information printed on banana, orange, mango and lemon fruit boxes to develop these abstract and minimalist compositions using a paper collage technique. The boxes arrive in London in large containers and ships, exported from countries including Brazil, Colombia, Ecuador, Honduras, Venezuela, Egypt, Uganda, India and Bangladesh. Despite being created as collage, the artist refers to painting and the possibilities offered by colour, using the painterly aspect to address topical issues.

Társis (b. 1995 in Salvador, Bahia) attended the Free Courses of the Museum of Modern Art, Bahia, 2015, and Parque Lage School of Visual Arts, RJ. 2017. He exhibited at Art Rio and received the 5th EDP Award of the Tomie Ohtake Institute, SP, 2016 and attended the conference Echoes Goethe-Institut, Berlin in 2019. He developed visual research during nine months in London about the Gold Cycle in Brazil and Relations with England and has received the Akademie Schloss solitude fellowship for 2020 in Stuttgart, Germany.

The VIA Arts Prize is an annual award in London, sponsored by Itaú, that seeks to deepen cultural awareness of Latin American, Spanish and Portuguese arts and cultures in the UK. The Prize is open to all artists living in the UK, of any nationality, to submit an original artwork specifically inspired by Ibero-American arts and culture.

Antonio Társis was selected for the £5,000 prize from a shortlist of thirty and a longlist of over 400. An exhibition of work from the shortlisted artists is on view at the Embassy of Brazil until Wednesday 11th December.

Kenya Tea UK has launched a collection of premium teas

Win a holiday in the Maldives – Its your chance to...

TEDxClapham explores the theme of growth