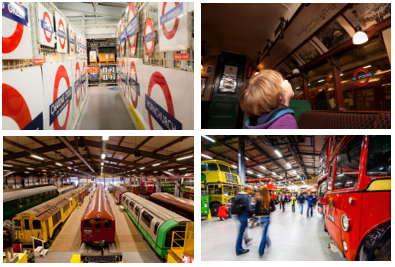 For one weekend this September, London Transport Museum’s Depot in Acton, West London, will throw open its doors, giving visitors the chance to explore a transport treasure trove.

Rarely open to the public, the Depot houses most of London Transport Museum’s extensive collection – over 320,000 artefacts from the Capital’s transport history. September’s event will offer visitors the chance to see fascinating objects not currently on display at the Museum in Covent Garden, as well as enjoy a lively programme of talks, workshops, guided tours, demonstrations and family activities.

Inspired by London’s plethora of railway termini stations – the Capital has more of these than any other city in the world – the All change! Open Weekend programme will delve into the history of London’s mainline stations and rail routes. From Waterloo’s hidden features and the ambitious infrastructure project that transformed London Bridge into an award-winning station, to the neighbourhoods that have been created and shaped by the network, visitors will discover another side to the stations and journeys that are part and parcel of everyday life in modern London.

At the All change! Depot Open Weekend visitors can:

With lots of activities for families, visitors can also:

Since the alleged kidnapping of Chloe Ayling, we ask an expert...

New report reveals over half of London’s nurses plan to leave...