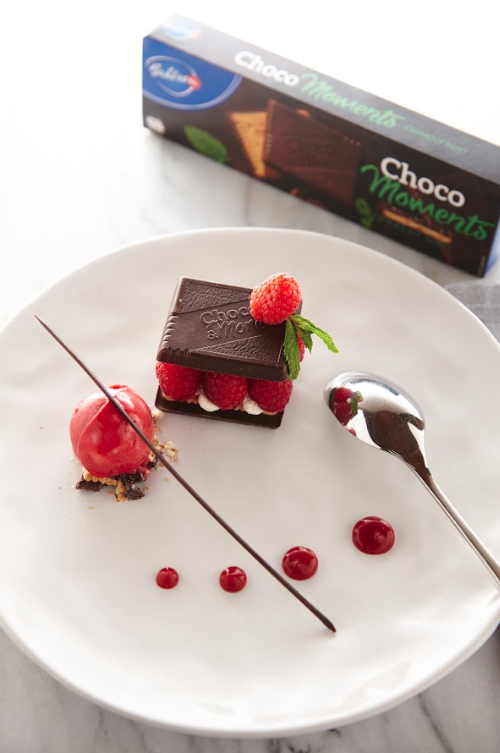 The ad picks up from where the previous ‘Choco Leibniz’ Murder Mystery cliffhanger left off and the detective is back on the hunt for the murderess, Frau Kassmayer. But yet again, she makes her escape using another delicious distraction. The detective is powerless to resist the new, even more indulgent Choco Moments…. and who can blame him?  With a thick, indulgent coating of rich dark chocolate and crunchy mint pieces, it’s not just a biscuit, it’s a Bahlsen. Have you found them yet?

Chris Wheeler is no stranger to luxury, as head chef at multi-award winning, five-star hotel Stoke Park. After shooting to fame on BBC Two’s, Great British Menu, Wheeler now releases his debut cookbook, ‘The Ginger Chef Served Up”, packed with delicious, easy to make, yet show-stopping recipes. Bahlsen biscuits are the base of three luxuriously indulgent desserts.

Each delicious dessert is perfect for making at home, simply follow the recipes below.

Created alongside Reece Collier, a great friend, this is an adaptation of one of our fine dining restaurant Humphry’s dishes.

For the chocolate mousse

Bring milk and cream to the boil. Meanwhile mix the egg yolks with the sugar. Once boiling, slowly add the egg mixture. Take off the heat and pass through a sieve. This is the Anglaise.

For the chocolate mousse – soak the gelatine in cold water, squeeze out excess and dissolve into the warm Anglaise. Add the chocolate and allow to melt. Mix well. Leave to cool. In the meantime, whip the cream to soft peaks and fold into the cooled chocolate mix. Leave to set.

This is my twins, Victoria and Vanessa’s favourite dessert and it’s very simple to make so it’s good for a family day of fun, creating and then eating the dish together.

For the raspberry cream

For the Chantilly cream

For the raspberry coulis

Make the raspberry cream by mixing together the mascarpone, sugar and raspberries. Whip the ice cream and fold into the mascarpone mixture. Refrigerate.

Meanwhile make the Chantilly by whipping together the cream, sugar and vanilla essence

For the coulis – boil the purée and in a second pan boil the sugar with a bit of water. Once boiling, place the sugar in with the purée. Boil again, remove from the heat and leave to cool

For the ice cream

Soak the gelatine in cold water, squeeze out excess moisture before dissolving into the melted white chocolate.

Mix together the cream cheese, whip the cream and fold into mixture.

Divide the cheesecake mix into 2, fold the blitzed cherries into half.

Blitz the dark chocolate biscuits with melted butter. Place on a lined baking tray and cut 10 circles out. This will form the bases for the cheesecakes.

How to Install Flooring?