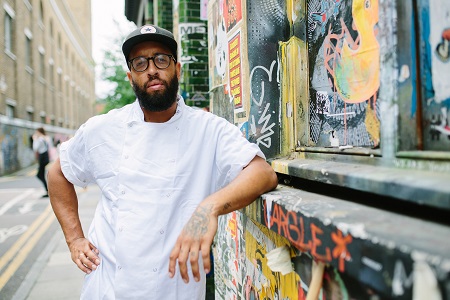 Bringing a brand new addition to Boxpark Croydon’s ever-evolving roster of food concepts, Chef James Cochran will on August 15th be opening the doors to his latest food concept, GOAT. In 2018, James was crowned the ‘champion of champions’ at the popular BBC TV programme ‘Great British Menu’, followed by opening his critically acclaimed 12:51 Restaurant in Islington is now opening his first street food venture, GOAT.

Cochran used goat in his main dish on Great British Menu and introduced it to the menu at his 12:51 restaurant in Islington.

Its popularity led him to develop the street food concept, which offers barbecue Jamaican jerk spiced shoulder of goat in a flatbread with a choice of sauce toppings including his popular Scotch Bonnet Jam. Vegetarians can order coal roasted jerk spiced cauliflower, and all dishes come with coriander, corn nut and crispy shallots.

Cochran has been working with Cabrito, which aims to get male kid goats that would otherwise have been euthanized in the dairy industry in to the meat supply chain. It now supplies restaurants, butchers and caterers nationwide with what was once a waste product.

How to Save Money Fast