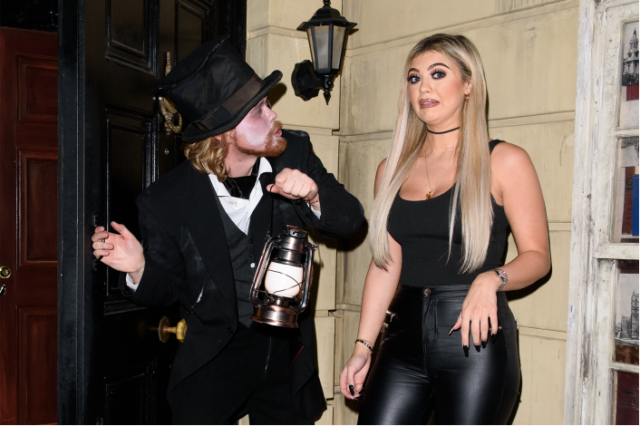 Baker Street was full of fear as a whole host of TV royalty spent the day at Madame Tussauds London’s newest terrifying Halloween experience, Tales from The Chamber, where they came face-to-face with some of history’s most notorious crimes.

In a strictly limited two-week run, Madame Tussauds London is hosting a truly chilling actor-led pop-up, where some of Britain’s most gruesome historical crimes that were once featured within the original Chamber of Horrors are brought back to life. Celebs were granted an exclusive preview and prepared for a thoroughly creepy experience.

Swapping Essex’s famous nightlife hotspot, Faces, for frights, TOWIE’s Jess Wright came up close and personal with real, grisly crime scene evidence and original possessions of the monsters behind some of history’s most chilling murders.

Thrill-seekers Tallia Storm and The Circle 2018 finalist, Freddie Bentley, also endured the horrors of history, as they encountered actors bringing to life four of the country’s most notorious murders.

Following her romantic reunion with Anton Danyluk, Love Island’s Belle Hassan swapped the Majorcan sun for the spooky Chamber as she got an exciting first look at some of the frightful relics collected by Marie Tussaud and her family since the 1800s.

Tales from The Chamber has a strictly limited two week run and is for serious Halloween scare-lovers, who want to know what it feels like to stand amongst actual items used in horrific murders dating back to the 19th and 20th centuries.

10 ‘Must See’ Events at the 20th London Harvest Festival

London garage-punk collective The Cavemen back with a bang