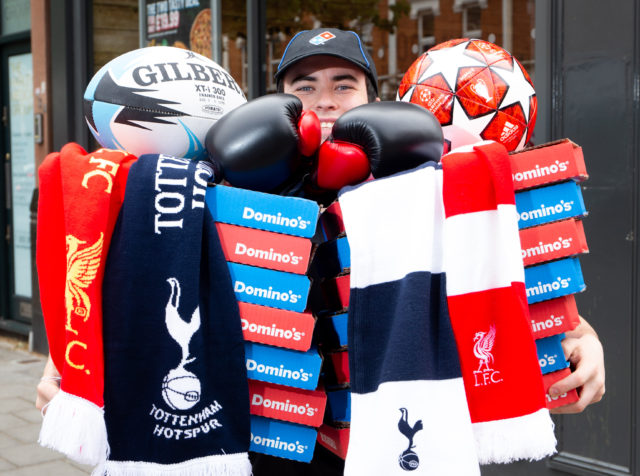 Domino’s is predicting its busiest day of pizza orders in 2019 so far this Saturday, with millions of Brits expected to tune in to the all-English Champions League Final clash between Liverpool and Tottenham, Anthony Joshua’s US boxing debut, the Premiership Rugby Final at Twickenham, the Epsom Derby and the Cricket World Cup.

The nation’s favourite pizzamaker is dubbing the occasion ‘Super Saturday’ and expects to freshly-handmake more than 1.7 million pizzas throughout the day.

7pm is predicted to be peak ordering time – one hour before the Champions League final kicks off – and Domino’s has drafted in 3,000 extra pizza chefs to fulfil a whopping 40 orders a second.

Whilst UK roads are expected to be unusually quiet, 7.25pm will be peak delivery time with more than 15,000 drivers out and about delivering over 15 million slices of piping hot pizza to hungry sports fans.

The total number of pizzas delivered on Super Saturday would stretch over 300 miles – more than 5,000 times the length of Liverpool’s Anfield pitch.

Scott Bush, Operations Director at Domino’s commented: “Two major clubs with massive followings in the Champions League Final could make Saturday the biggest pizza occasion of 2019. Whatever team you support or whatever sport you’re watching, we have thousands of pizza chefs primed and ready to serve the millions of football, rugby, cricket, horse-racing and boxing fans glued to screens across the UK.”

‘Super Saturday’ in numbers:
⎯ 2,396 pizzas expected a minute
⎯ 40 pizzas expected a second
⎯ Pizzas sold during the day are expected to stretch over 300 miles or more than 5,000 football pitches
⎯ Over 15 million slices of pizza are expected to be eaten
⎯ 7pm will be the peak ordering time for super sports fans
⎯ More than 3,000 extra Domino’s team members serving pizza nationwide

A special Two Tasty Deal is offering two medium pizzas and one sumptuous side for £19.99 to all Super Saturday fans throughout the day.

LondonPost Test: Can YOU identify your National Anthem in the crowd

London was selected as being the best UK city in nationwide...

Police in Islington are appealing for the public’s help to find...

Tyler Simmonds has a mission for Mental Health