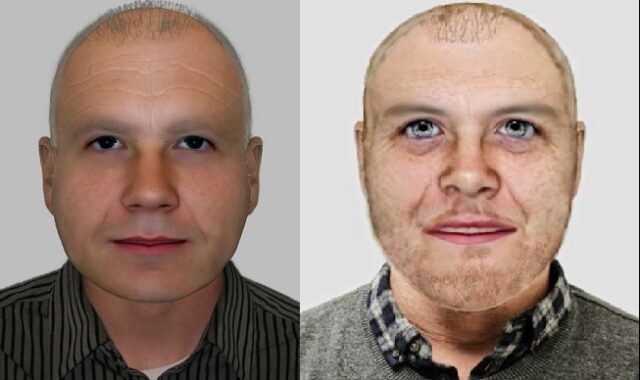 Detectives investigating a fraud in which a man was conned into handing over more than £100,000 of his savings have released E-fits of two men they would like to identify.

During an 11-month period, a 58-year-old man in Islington was targeted by a group of men who persuaded him to give them money for a series of repairs on his house that were not required.

The victim was first approached in October 2018 by the fraudsters, who charged him £1,500 to erect some scaffolding in his garden, which they said would be refunded at later date.

They subsequently told him he needed to pay a further £4,000. He refused and paid another company to take it away.

In July 2019, two men claiming to be builders working for a company called ‘Supreme Roofing Limited’ knocked on his door wondering if he wanted some work done on his roof.

A price of £1,500 was agreed, however, the builders continued to increase the price, claiming more work was needed.

The men kept demanding more money for materials and extra repairs to the roof. When the victim refused to pay and told them he would call the police, he was then contacted by someone from Action Fraud claiming he needed to pay £5,000 to ‘catch’ the suspects.

The fraudsters also posed as trading standards officers and asked the victim for further money to launch an investigation.

Detective Constable Alejandra Gomez, the investigating officer in the case, said: “This was a sustained and elaborate fraud perpetrated by a group of men who convinced a 58-year-old man to hand over a substantial amount of money.

“It would appear the suspects repeatedly damaged the interior of his property in order to create more work for themselves. Once the victim had threatened to call police, the suspects then impersonated police and trading standards officers.

“I believe these suspects may be linked to similar frauds carried out in other parts of London. I would appeal to anyone who recognises the faces in these images to contact police.”

Alternatively, you can contact the independent charity Crimestoppers anonymously on 0800 555 111 or online at crimestoppers-uk.org

The BOOZY business lunch could soon be a thing of the...

Make a start, look after your heart – make your heart...