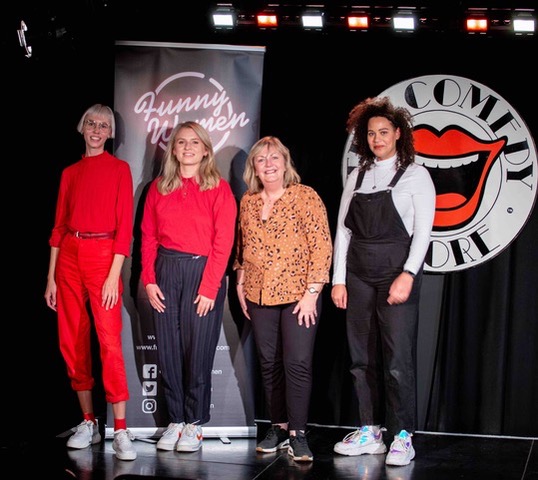 Tonight Izzy Askwith was announced as the winner of the prestigious Stage Award at the final of the 2020 Funny Women Awards hosted by 2014 winner, Jayde Adams. Izzy, originally from Banbury and now a production assistant in London, counts Sara Pascoe, Mr. Blobby and Nate Bargatze among her comedy heroes. She competed with seven other acts live on stage at the world-famous Comedy Store, London to take the title.

The Funny Women Awards are the leading showcase for new female comedy talent in the UK and Ireland, with its annual search for brilliant new performers, writers and creators.

2020 has been extremely challenging for the live comedy industry and this year’s competition, which launched on 1st April during lockdown, has been run virtually due to COVID-19 restrictions culminating in a live show behind closed doors which was streamed in real time to registered ticket holders. There was no audience and only the acts, judges and crew were in the venue.

‘The Funny Women Awards are an important and vital annual celebration of female comedy talent, so despite the restrictions imposed by the COVID-19 pandemic we are very proud to have run the competition throughout lockdown by taking our activity online.’ says Lynne Parker, Funny Women founder and CEO. ‘Women make a huge and valuable cultural contribution to the comedy industry and this year’s cohort of new talent has been no exception.’

Now in their 17th year, past winners and finalists of the Funny Women Awards have gone on to become household names. These include Katherine Ryan, Zoe Lyons, Jayde Adams, Desiree Burch, Sara Pascoe, Sarah Millican, Susan Calman, Rachel Parris, Bridget Christie, Kerry Godliman, Diane Morgan and Roisin Conaty. Laura Smyth won the Stage Award in 2019.  Eight finalists out of 320 entrants to this year’s Stage Award were selected by a panel of industry judges following 10 virtual heats and two live online semi-finals where the acts performed from their own homes over Zoom.

Winners of the Comedy Shorts Award, Comedy Writing Award and Best Web Series will be announced at a separate online presentation event on Wednesday 7th October from another top London location.

This year also sees the launch of a new industry-led Best Comedy Writer Award, run in partnership with Comedy 50:50 and championed by Funny Women Awards alumni Rachel Parris. The winner will also be announced on Wednesday 7th October.

‘The Funny Women Team have been really impressed with this year’s entrants. The standard was very high and in the face of challenges, the level of dedication and willingness to embrace the new platforms, especially from our semi-finalists, has been truly inspiring.’

What Does Property Management Software Do?