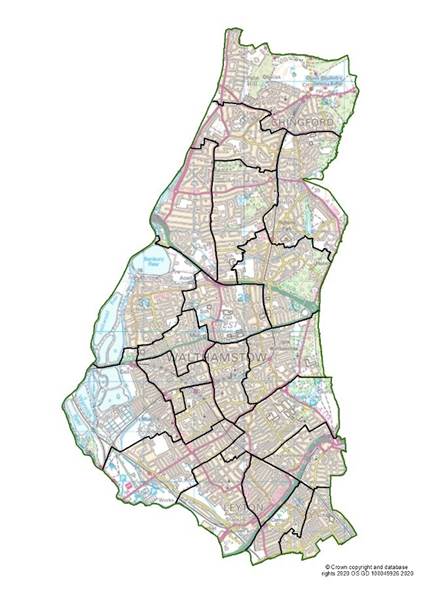 New boundaries are being proposed for council wards in Waltham Forest Council.

The Local Government Boundary Commission wants to hear what residents and local organisations think about the proposals. A ten week consultation on the proposals will run until 14 September 2020.

The Commission is the independent body that draws these boundaries. It is reviewing Waltham Forest to make sure councillors will represent about the same number of electors, and that ward arrangements will help the council work effectively.

The Commission is proposing that there should be 21 wards, and two or three councillors per ward. The boundaries of all the existing wards should change

After receiving strong evidence that Higham Hill Road should not be divided between wards it will now form part of Higham Hill ward.

“We want people in Waltham Forest to help us.

“We have drawn up proposals for new wards in Waltham Forest. We want to make sure these new electoral arrangements reflect communities. We also want them to be easy to understand and convenient for local people.

“Residents and local organisations can help us do that. We would like them to let us know whether they agree with our proposals before we take final decisions.

“It’s easy to get involved. Go to our website. Or you can e-mail or write to us.

“Just tell us what you think and give us some details why you think that. It’s really simple, so do get involved”

The Commission has a dedicated section on its website where people can see the detail of the proposals and comment on the names of wards, their boundaries and the number of councillors per ward: https://consultation.lgbce.org.uk/node/16843

People can also give their views by e-mail at reviews@lgbce.org.uk, and by post:

The Metropolitan Police Service has launched its most ambitious police constable...