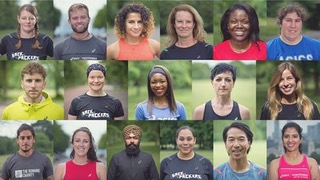 We all run for different reasons – from meeting new people to beating a PB or overcoming a difficult time in life – but the one constant we all share is the body-boosting, mind-clearing joy of it.
Ahead of the ASICS London 10K on Sunday 21st July, ASICS is telling the stories of 17 runners and exploring their personal reasons for running to highlight the differences we all have as runners but also the unifying impact of running and how when we run together, amazing things happen.
The eclectic group of runners, who came from all corners of the country – from Leeds and Preston to Hampshire and London – were brought together through several different groups including The Running Charity, Backpackers and the ASICS FrontRunner community.
The revealing video gives an insight into how people started running, who inspires them, what music they run to, as well as exploring the various things that make them tick. Be it Afrobeat or video game soundtracks to being inspired by a parent or inspiring yourself, each runner’s reasons for running are wildly different, but strip that all away and it’s the love people have for running that unites everyone.
Watch the full video here: https://youtu.be/T-xTNk6HhRE
For Steven Oltay, 23, running came to him at his lowest ebb after he was left homeless and addicted to drugs after a family breakdown. Weighing just seven stone and living out of a homeless shelter when he was introduced to The Running Charity, Steven said it was the discipline running offered that helped him on a path to recovery: “I’d given up on everything, I was addicted to drugs and I couldn’t find a way out. For me running is a form of meditation – it’s a time where you can think, clear and renew. It’s something that not only helped me get clean but stay clean.”
Hadeel Haasan, 31, also turned to running at a low point in her life. It was in the dark moments that Hadeel found running, and it’s now something she credits for completely turning her life around: “Running is survival – it was the only thing I stuck to during those dark times and I genuinely don’t think I’d be alive today if it wasn’t for running. Now I’m fitter, I’m more confident about myself, I’m healthier and I’ve met some wonderful people.”
In Jamie Gane’s case, running gave him a sense of freedom after he spent 14 years in a wheelchair. Following a leg amputation, he decided to take up running. “The transition from not walking at all to finally running was a really tough one but I just wanted to know what it was like to be like everybody else. I wanted to feel free and that’s what running is – freedom.”
ASICS is calling for runners to Run United at the ASICS London 10K on Sunday 21st July 2019 – no matter their race, creed, gender or beliefs – to celebrate the unifying impact running can have in our society.
For more information on the race visit the ASICS London 10k website: asicslondon10k.com

Edinburgh’s August Festivals Will Not Take Place in 2020