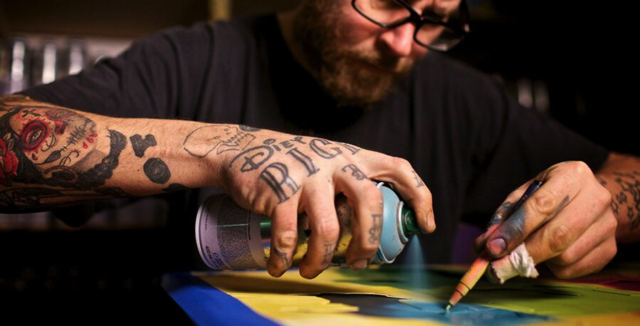 ‘Back To Work’, a new artist film commissioned by Kaspersky Lab will premiere at the Electric Cinema, Shoreditch on Wednesday 4th October. Shot on location and in Eine’s studio, the film will explore Eine’s art practice, offering insights into the artist’s creative process.

Kaspersky Lab has also partnered with Eine on the release of the 20th Anniversary edition of the internet security brand’s market-leading Kaspersky Total Security v.2018 product.

Eine’s specially commissioned artwork, including a new typographic ‘K’ produced exclusively for Kaspersky Lab and featuring the brand’s distinctive colour palette, will be presented through a large format installation to be unveiled at the Press Preview of the Moniker International Art Fair, from 12pm on Thursday 5th October.

The eighth edition of the Moniker Art Fair, the fourth to be directly supported by Kaspersky Lab, will run between Thursday 5th and Sunday 8th October at the Old Truman Brewery in Shoreditch, London.

‘BACK TO WORK’
by Ben Eine and Kaspersky Lab
5 – 11pm, Wednesday 4th October 2017 at the Electric Cinema, Shoreditch

The Electric Fireplace Versus The Ethanol Fireplace – Which Is Best...