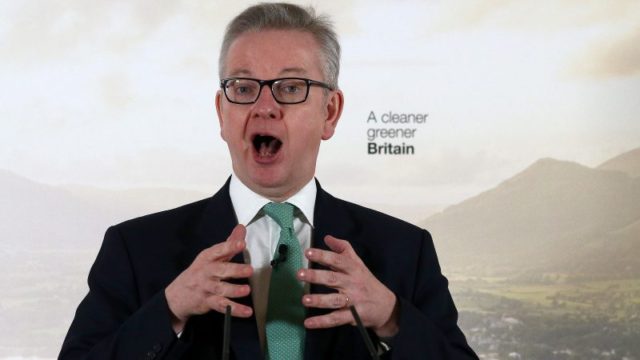 Michael Gove delivered a detailed and passionate lecture tonight on the UK Government’s commitment to tackling climate change. Asked about his commitment to the brief he said, “half an hour is now a long time in politics… but I am very glad to have stayed where I am.” Touching on carbon emissions, food supply, and extinction of various species, Mr. Gove quoted St Francis as well as his namesake, the current Pope.

Arguing humans, “have caused environmental damage and deterioration on a dramatic scale in the last century, with pollution, greenhouse gas emissions, biodiversity loss, habitat erosion, soil depletion, soil depletion and deforestation,” Mr. Gove suggested many of the answers needed lie within religious traditions. As well as Christianity, he touched on Muslim, Jewish, Buddhist, and Sikh concepts.

Extensively quoting from the Pope’s encyclical Laudato Si which calls for Christians to work for social and environmental justice, the Secretary of State endorsed the Holy Father’s call for both individual and national action. Mentioning the former Pope, St John Paul II, Mr. Gove identified the, “pressure to tread more lightly on the planet,” which, “is coming from the young. Inter-generational solidarity is not a nice to have – it’s a basic question of justice because the world in which we live belongs also to those who will follow us.

He encouraged people of all faiths and none to be, “not just careful stewards of creation but also warriors for social justice” in seeking to, “protect our natural inheritance and bring a richer life to more.”

“We believe creation is a gift we must preserve,” Mr. Gove said, as he urged the 250 strong audience, “to combat poverty and restore dignity to the underprivileged at the same time as protecting nature.” He ended by stating, “as religious leaders down the ages have urged, we can be better stewards of our earth and plant a harvest for the world.”

Asked whether staying in the EU would have made the collective action now required to tackle climate change easier, he said “that’s a fair point” but also pointed out that “virtuous competition” between the EU and the UK had already led to each raising their commitment to reducing single use plastics.

Do you have what it takes to be an Entrepreneur?

Caridon Property wins the Commitment to the Community award at the...