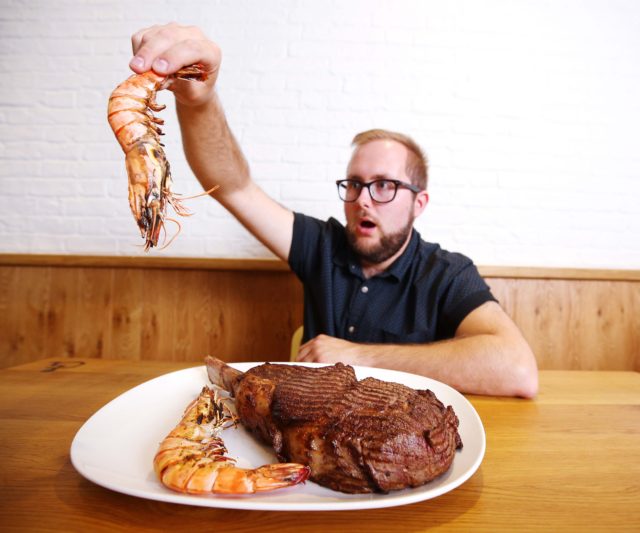 Morrisons is launching a super-sized surf and turf this weekend to treat the nation’s dads this Father’s Day.

The enormous prawns are 25cm long and weigh 111g each – more than eight times the size and 27 times the weight of a cold water prawn – at 3cm long and 4g weight respectively. They are sourced from the warm waters of the Mekong delta in Vietnam, where they feed on a natural plankton diet.

The British Best Tomahawk Steak comes in at a huge 900g (over 32oz), the equivalent of nearly four average rump steaks. Served on the bone, the steak is hand prepared by Morrisons butchers at its own food making sites, where the meat is matured for 21 days to maximise richness and flavour.

Morrisons is introducing the £20 deal following the success of the Father’s Day Tomahawk in 2018 which saw the supermarket sell over 10,000 steaks over one weekend. However, meat and seafood lovers will need to be quick as the deal will only run between 13 to 16 June[i]. Customers can also buy each product separately – two giant Black Tiger prawns will cost £5, and each The Best Tomahawk is priced at £15.

Jodie Bolland, Senior Meat Buyer at Morrisons says: “The giant surf and turf is our meatiest challenge yet for Dads on Father’s Day. We hope they enjoy it this weekend – whether they’re attempting it solo or enjoying it as a family meal.”

Customers who aren’t up for the challenge, can ask Morrisons butchers to cut a slightly smaller steak – such as a fillet, rump, ribeye or sirloin. The supermarket has 2,000 professional instore butchers who can bone, trim, seam and prepare steaks, plus advise on recipes, cooking and wine pairing. All of the supermarket’s beef is sourced directly from British farmers.

The Giant Surf & Turf will be available in the majority of Morrisons supermarkets[ii] this weekend (Thursday 13th to Sunday 16th June) or while stocks last.

Leicester Square will come to life with a trail of dynamic...

Inside the Citi Microentrepreneurship Awards shortlist

Launch of ‘Autumn Nights’ crackdown ahead of Halloween and Bonfire Night