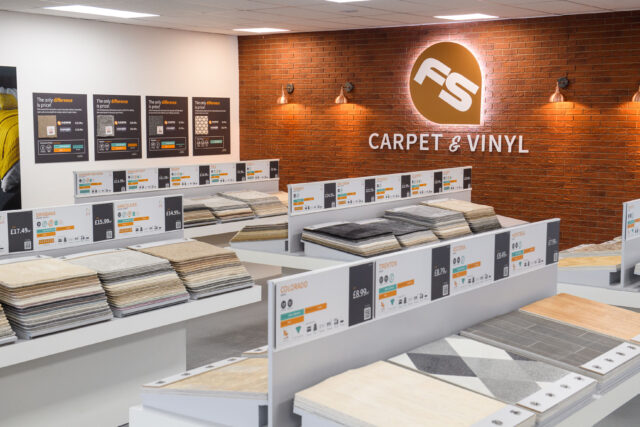 ONE of the UK’s fastest growing flooring retailers is preparing to open its second London store in a month – and its 21st in total in just 3 years.

Flooring Superstore has chosen Croydon as the location for its latest outlet, which will open tomorrow (Saturday 19th September).

The company is investing £150,000 and creating four new jobs for local people with the opening of the 4,355 square foot store in The IO Centre on Croydon Road.

Shoppers will have access to an unrivalled range of carpets but also a huge choice of other flooring, such as vinyl, laminate, real wood, luxury vinyl tiles, EvoCore and the UK’s largest selection of artificial grass.

This will be Flooring Superstore’s second store in London, having opened an outlet in Brent Cross in August.

Flooring Superstore Regional Manager Ian Robinson said: “We are delighted to have been able to choose Croydon as the location for our newest store and to be opening so soon after we welcomed shoppers in North London.

“It’s a bit like buses; you wait a while for one and then two arrive at the same time!”
Just eight years ago, Flooring Superstore was purely an online brand, but it started opening physical stores in 2017 and hasn’t stopped since.

With the Croydon branch, on average it has opened seven stores a year across the length of the UK, from Edinburgh in the North to Havant in the South, and Newton Abbot in the West to Thurrock in the East.

“Having a presence in the Capital has always been a long-term goal, so it’s a significant milestone to now have two stores in London, and hopefully more to come in the future.”

To mark the opening, Flooring Superstore is running a free, instore ‘Golden Ticket’ promotion. Anyone who comes into the store, regardless whether they are buying flooring or not, will be invited to take one of 150 tickets. 145 of these tickets will have 15% off flooring, four will give people £250 to spend in-store and one golden ticket will give a lucky person £1,000 to spend on flooring ranges of their choice.

London’s frontline nursing and midwifery staff can apply for £250 award!

Join the wordsmith Tube duo behind All On The Board in...