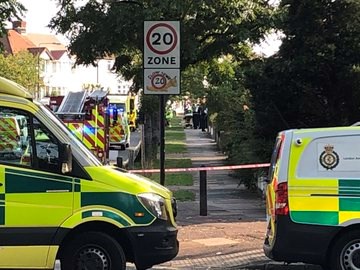 Following a serious road traffic collision in Kidbrooke this morning, sadly a man was pronounced dead at the scene.

Firefighters attended a serious road traffic collision between a lorry and two cars which has resulted in structural damage to a house on Woolacombe Road in Kidbrooke.

Station Commander Nathan Hobson, who was at the scene said:

“It was a challenging incident and it appears that a lorry collided with two cars and crashed into a house.

“Specialist Urban Search and Rescue crews attended the scene and efforts were made to free the lorry driver but sadly he was pronounced dead at the scene.”

The London Ambulance Service confirmed that they treated a further three patients. One was taken to a major trauma centre, one was taken to hospital, and one was discharged.”

The Brigade was called at 0806. Firefighters from Eltham, Lee Green, Bexley, Croydon and East Greenwich fire stations attended the incident.

Caroline Pidgeon AM “Sadiq Khan cannot run away from responsibility on...