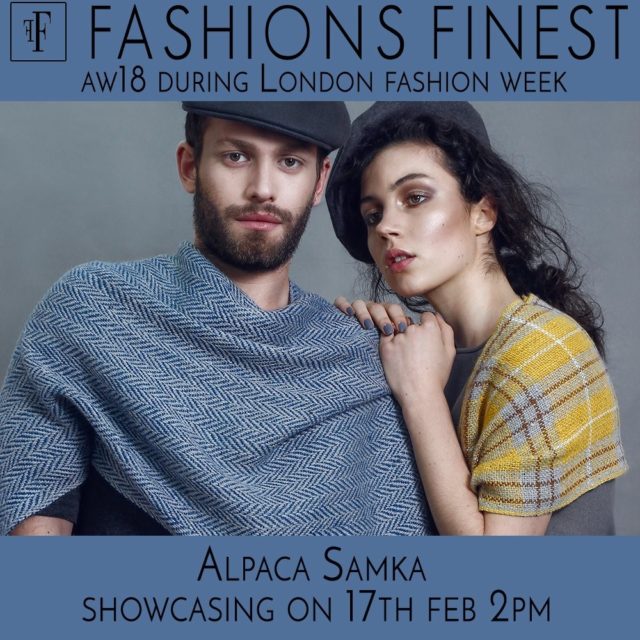 A true cosmopolitan Andrea was born in Chile into a family of Italian and Spanish immigrants, educated by English ladies in a school that was all about British values and traditions, raised near a port city with a strong multicultural heritage, she has known from her early years the very best of many worlds.

As a self-taught slow fashion designer – with studies in fine arts, architecture and culinary arts – she started Alpaca Samka in 2007, working with Aymara weavers from the Andes highlands of Chile. She travelled to many isolated, and it would seem, almost forgotten villages for more than two years, living in harsh conditions between 2,800 and 5,800 meters (9,186 – 19,000 feet) above sea level to rescue ancestral weaving and braiding techniques.

Andrea only works with natural fibres, mostly with alpaca yarns from animals bred on natural pastures, hand spun and hand woven by indigenous communities. Her collections are based on traditional Andean methods and British weaving patterns keeping the legacy of both the Andes native peoples and the immigrant pioneers of South America.

She values simplicity and authenticity, where less is more, creating timeless collections, quality textiles with an infinite lifespan. Her work has received a nomination to the “Best Performance in the Sustainable Luxury Awards” and has exhibited in important fashion shows such as “Ethical Fashion Show” in Paris and the “Latin Trends”. Andrea is now located in the UK working from Gloucestershire after being selected by the UK DIT Latam inbound investment program.

What three traits define you?

Humility (to accept that many times you are not the architect of your own destiny and that life takes you through different unknown paths (good ones and bad ones), but it is a way of continuous learning).

Conviction (I always try to give my best).

Patience, accepting the things that I could not change and wait for the good things to come. And never forget to “be grateful”

How did you get into being a fashion designer?

I’m self-made… someone who finally ends up as a slow fashion designer. I used to be a chef, working hard and in charge of a large manic restaurant but textiles were my hobby. When my father became ill I planned to leave the kitchen to spend more time by his side. So I thought about doing cooking workshops, but a friend of mine offered me a shop to rent (just behind my father’s home) and she suggested that I open a hand woven accessories store (because she knew that was one of my hobbies). I followed her idea and then everything changed.

Where does your inspiration come from?

Nature, landscapes, stories about immigration. A scarf is just a scarf, but if I tell you the story behind it: who made it, how it was made, the inspiration of the collection, the stories about the immigration, the beauty of the landscapes, how things were, how we are bringing them back, from the past. The romanticism and epic thing, the story behind. Now, you have something that is unique. It surpasses time, and its quality and design make it timeless, a slow fashion product, that you can wear for any occasion and it’s also trans-seasonal because you can use it in winter or summer as alpaca fiber protects from cold and insulates from heat.

Do you have a Muse you wish you could see wearing your designs?

I really admire lots of people, especially artists with a social sense, people with credibility who leave a legacy. But I also admire people who live in anonymity and leave a legacy. In any case, I think it is better than the important person called “muse” (who could be her or him) chooses our brand.

What are the biggest challenges in your career?

Being recognised as a sustainable luxury brand.

What can we expect from youfor 2018? A limited edition of luxury scarves, some from our iconic collections like Humberstone or Australis, and some others from the most recent collections like Wild Patagonia (which is going to be exhibited in your fashion show), and to develop some locally inspired collections like “Gloucestershire”. We are also working in other collections like “Red”, the colour of love (because I came here to live in a historic property called “The Red House” with my soul mate, and we got married in the same house, in the garden). So it will be a collection to honour the house, garden, and love.

What other plans do you have for the future?

Work from home, spending more time with my new family, having a quiet life. Write a book about being a sustainable entrepreneur, to encourage new entrepreneurs. The paths can be rough sometimes, but you should follow your dreams and instincts, and believe that you are doing the right things, never give up, because the universe is watching you from above… and sometimes, the magic can come true. I would also love to create new collections and work from my own weaving studio in the Gloucester countryside. The next collections will combine local British wool with Andes highlands alpaca fiber. I also want to develop new limited edition collections of accessories (scarves) handwoven here in the UK, combining local plant dyes, inspired by local stories and the marvelous Gloucestershire heritage, landscapes and nature. We also want to make a contribution to the Aymara weavers (improving their working places) and to assist different charities (such as child and conservation charities), here in the UK. Finally, I want to teach kids about sustainable textiles, natural local fibers, and textile techniques, teach them about making their own accessories that would for sure…be “one of a kind” and teach them how important it is to become a conscious consumer.

My soul (I feel… then I exist), love, passion, history, nature, unique things, unique pieces, handmade things, hand-woven things, things that tell you stories, things that have content, made in a sustainable way.

How has your personal life influenced your career?

My personal life is full of stories and is completely mixed up with what I´ve been doing. The textiles and the British presence were always present in my life. I came from an Italian immigrant family, with a lot of stories from immigrants, lots of British friends around my family. I was the only member that was sent to study in a British school instead of an Italian one. That’s where it all started. I was really impressed about the British immigration in Chile; you really helped to build our nation. The British spread all over the country, in Patagonia, South Chile, Valparaíso Port, and in the Saltpetre’s offices in the Atacama Desert. I have done a lot of things in my life (I could write a book about them!), and the textiles were my hobby, but all the paths took me to one road. Finally, I end up weaving with the Aymara indigenous communities in the Andes Highlands and that´s how the alpaca project started. I started weaving modern pieces using traditional weaving methods, but one day the magic happened, I discovered the old weavers were weaving traditional British designs, like “herringbone”, “log cabin” and some tartans then I met a man, who authored local history books, and I started a kind of self-investigation. I asked some other people and friends that worked in local tourism and they told me that the Aymara had worked for the British in the saltpeter’s offices, so there was the origin of their knowledge about the British designs. So to honour this, I created this first collection that gives Alpaca Samka a unique style (Humberstone). Handwoven sustainable accessories made by the Aymaras, honouring the British immigration. Then I designed Old Port (the dandy look from the British immigrants in Valparaiso); Natural (that combined linen (that comes from Holland and Sherry, a British mill based in southern Chile) and alpaca fiber (from the Aymaras). After this came Australis (our first colour collection), inspired by the Patagonia landscapes and the British wool ranches. Now we are working on the Wild Patagonia collection, inspired by the landscapes that surround the Fitzroy mountain (which historically actually inspired the eventual Welsh immigration to Patagonia). My new stepfather is Welsh, and well… you can see my personal life is mixed up with everything I do. I think in life that there are no coincidences. I can finally say: “that I´m grateful to the Universe and of the ways by which it has taken me and the people that it has put in my life”. 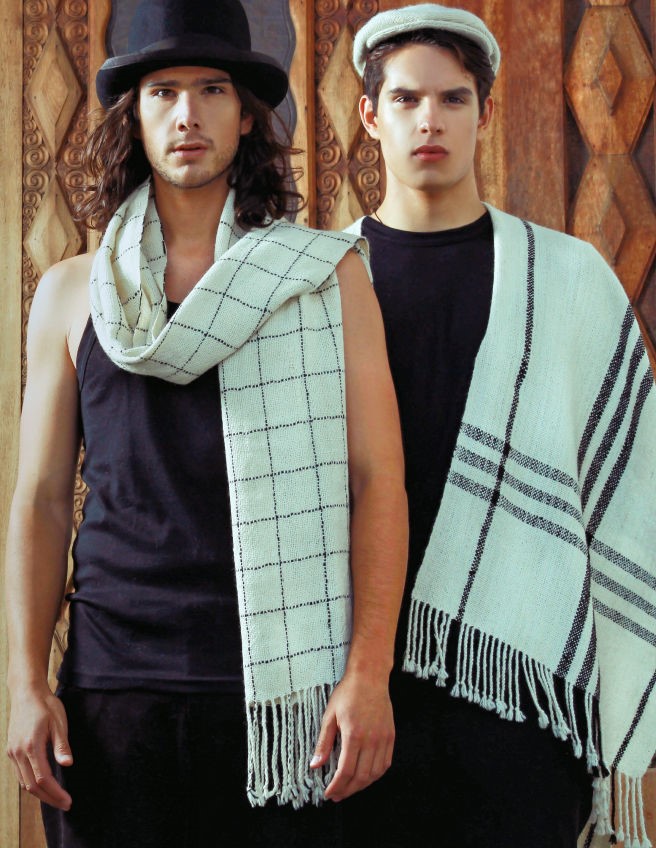 What was your greatest success in the past few years?

I’m a self-made person, so I´m very grateful for being recognized as a sustainable entrepreneur and slow fashion designer in my home country (Chile). My work was sometimes sponsored by the Chilean Trade Commission Office (Prochile) and was selected to come here under the UK Latin America DIT program. · Having appeared in publications like Vogue Magazine or Harper’s Bazaar has been a recognition of my experience, as well as having participated in Latin Trends fashion shows in Chile, Italy, and the UK. · The nomination for a third time to the Best Performance in Latam Sustainable Luxury Accessories Awards was also an achievement. But having found my soulmate and getting married again was the best thing in the past few years!!

Do you have a story you are particularly fond of, from the early years of your career?

Three important items My father was my guide, my spiritual guide, he always told me stories and things that would happen in my life, he told me about destiny… and also told me that when you wish something, you should just ask for it. “Ask the Universe”, he always said to me… so in my desperate times, I went along with this, and it worked… At the beginning I remember having no money to start the alpaca project, I was on my own, leaving the restaurant kitchen, becoming single, taking care of my sick father and having a little daughter. I remember I wished and asked about how could I solve the thing about contacting the Aymaras in the Andes highlands, far away from where I was living… and suddenly they appeared in front of my shop, two Aymara weavers carrying with them lots of alpaca shawls…and that´s how I started the project. The other thing that I remember was when I was at the Ethical Fashion Show in Paris, exhibiting the alpaca accessories, and I remember I had a flashback… I saw how things where the alpacas raised on natural pastures, the fiber that was hand sheared, then hand woven, using new designs… and then we had a collection, our first collection…. and we were in Paris, showing it!!!…. For me, the complete process was “magic”. Lastly the story about wondering where it would all end… when I was passing through a bad economic situation, having to close the alpaca shops in Chile, and the people from the UKDIT program were looking for a partner for me to assist in the UK, which was really difficult… or impossible!!!… And then there was a friend from the past who appeared and believed in my project and he finally helped me to bring the Alpaca Samka project to the UK… and now he is my husband!! After all, I can say that I have learned that “small things” or “simple resources” can be magically converted into big things, beautiful things, and luxury things. I have also learned that when you think that all your hopes are lost, but your feelings still believe that there are still chances… something or someone appears, and that something or someone could change your life completely.

Summer by The River Returns