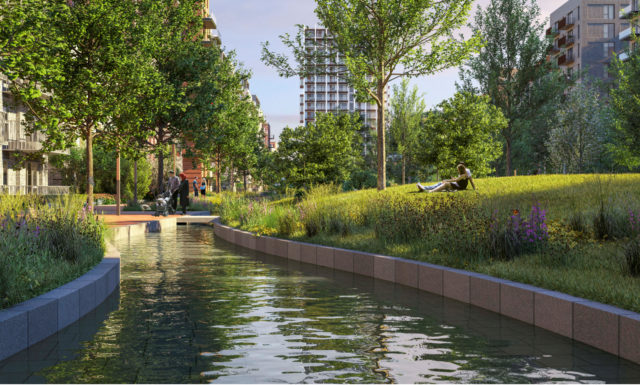 Southall and Hayes are set to benefit from a new public park for the whole community to enjoy from early next year at Berkeley West Thames’ newly-named development, The Green Quarter.

The London Borough of Ealing gave the go-ahead for the new park, which will be named Central Gardens, earlier this year, and Berkeley is making progress with its first phase, which will include a new playground inspired by the site’s industrial past, an impressive water feature which will flow the length of the park and a new amphitheatre to host open air events. On completion, the new park will have over 250 new trees and stretch 500m in length, providing 1.8 hectares of newly-accessible open space for the local area – the equivalent size to four football pitches.

Future phases of Central Gardens will provide various habitats for wildlife and plants to thrive such as woodland and wetlands, which are being designed in partnership with London Wildlife Trust. Fitness enthusiasts will benefit from outdoor gym equipment while fitness routes are planned to connect into The Green Quarter’s other open spaces and beyond into the neighbouring Minet Country Park. Cultural art elements and information boards across the park will educate residents and the local community on the history of the site and the various plants and animals present within the development and across Ealing.

The Green Quarter, previously named Southall Waterside, is one of London’s most ambitious regeneration projects, which is transforming a former industrial site between Southall and Hayes into one rich in biodiversity and nature. On completion, The Green Quarter will be home to 13 acres of new green space, connecting local communities and encouraging outdoor living. Berkeley has rebranded the development to better reflect this vision and to highlight the fantastic open space and nature recovery, where flora and fauna can thrive.

Central Gardens is one of two new parks planned at The Green Quarter, and overall plans for the site include two new footbridges which will allow easy access into the 90-acre Minet Country Park, which borders the western side of the site. More than a kilometre of frontage alongside the Grand Union Canal has been opened up to the community, further adding to the new space available.

The new green space will sit on the same site as 3,750 homes and new amenities to benefit the local area. The first phase of homes for sale will be launched soon.

Ashley Kensington, Managing Director at Berkeley West Thames, said: “Through the new parklands being delivered at The Green Quarter, we’re more than doubling the accessible open space in the Southall Broadway ward. Central Gardens is for everyone in Southall, Hayes and the local area to enjoy, and opening it early next year will be an important milestone in The Green Quarter moving from concept to reality.

“The Green Quarter is a remarkable development with nature and greenery at its heart – we’re transforming a former industrial gasworks site and delivering, or opening up access to, more green space than St James’s Park and Green Park combined.

“Construction of the new park is really coming along, but we’re also making good progress with the new homes and we can’t wait to launch our first phase of residential sales soon.”

The Open University to offer funded space technology and expertise to...