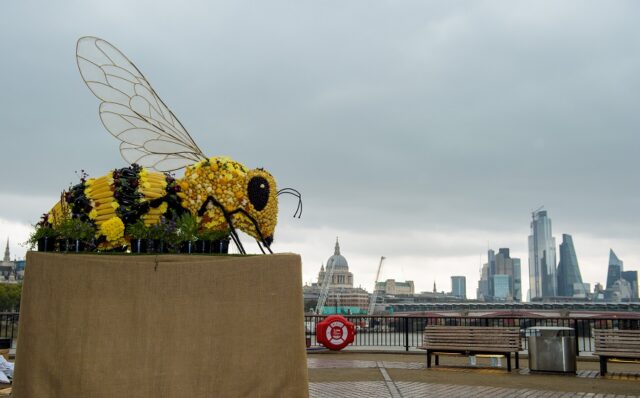 Yeo Valley, the family-owned farming and dairy company, today launches its Organic Bee on the South Bank, an installation in the shape of the plant life queen made from organic produce. Specially created to celebrate Organic September and raise awareness of organic food and benefits of organic farming, this unique, edible sculpture inspires passers-by to better understand what organic means, including promoting biodiversity on farms.

Recent research by WWF1 and Buglife2 has revealed that insect pollinators such as bees are under threat.​The study found that in the east of England alone, 17 species are now extinct in the area, 25 are threatened and a further 31 are of conservation concern.​Bees provide vital pollination to some of the most important ingredients in our favourite foods. Nearly 75% of the world’s crops producing the fruit and seeds that we eat depend on pollinators such as bees.

Yeo Valley’s Organic Bee hero’s these vital pollinators and aims to educate people on the value of choosing organic produce.

With nine out of ten UK adults feeling concerned about increasing threats to the natural environment, and nearly two-thirds are specifically worried about biodiversity loss, it’s a topic that is high on everyone’s agenda4. Choosing organic means fewer pesticides, no artificial colours, preservatives, GM ingredients as well as being always free range.

Created and developed in collaboration with Food Artist Prudence Staite, Yeo Valley’s Organic Bee was displayed on the South Bank on Sunday 22nd of September for all to see, as delicious organic soups with a creamy Yeo Valley dairy base were given away with money off vouchers! What’s more, the bee invited passers-by to take part in a social media competition, with a chance to win an organic hamper filled with organic goodies.

London-based women provide masks for those in need as they launch...