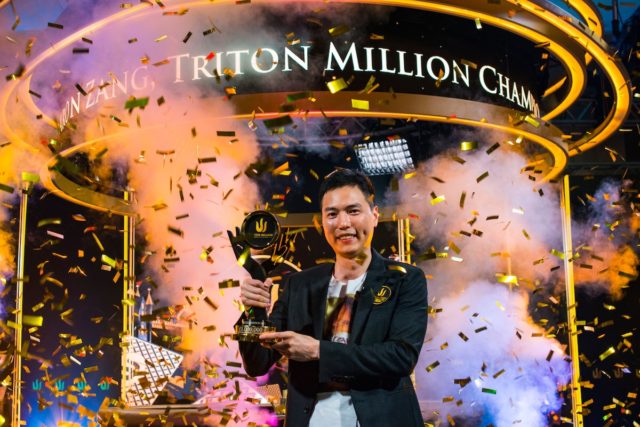 The biggest buy-in poker tournament in history ended in the most spectacular surprise tonight when Aaron Zang, a previously unheralded financier from Shanghai, beat some of the world’s best known poker players to win the Triton London – A Helping Hand for Charity tournament at the Hilton Park Lane, London.

The event required a buy-in of £1.05 million, the most ever for a poker tournament, from which £50,000 per person went to charity. With 54 entrants, the total prize pool weighed in at £54 million and paid its winner £19 million.

With two players left, Zang, 37,, with shaking hands and a racing heart, was able to overcome Bryn Kenney, from Long Island, New York Even with the imbalance in chips and experience, Zang won two crucial hands to clinch the title and the trophy. “Miracles happen,” an emotional Zang said, as he became the first Chinese player to win on the Triton Series.

“I didn’t think you were that good,” joked Triton co-founder Paul Phua as he handed the trophy to his old friend Zang.

Kenney cannot be too disappointed. The 32-year-old’s payday was the biggest ever awarded to a poker player in tournament history, even if he is officially the runner-up. His near £17 million ($20.5 million) prize sent him to the top of poker’s all-time money list, leapfrogging his countryman Justin Bonomo. It took Kenney’s career winnings to more than $55 million, more than $30 million of which has come this year. Kenney’s spectacular run has included huge scores in Australia, South Korea, Montenegro and now London.

“I wanted the trophy but it’s the biggest win that anybody’s ever had, number one on the all-time money list, what can I complain about?” Kenney said. “It’s incredible.”

Eight players remained at the start of play on the final day, including three other players – Dan Smith, of the United States, Stephen Chidwick, of the UK, and Canadian Timothy Adams – who also could have become the leading money earner in world poker had they won. But Adams was knocked out in eighth, and Kenney then eliminated both the other two, with Chidwick falling in fourth and earning £4.41 million, and Smith knocked out in third, taking £7.2 million.

The tournament was open only to a select group of recreational poker players extended an invitation by Triton, who could then bring one guest—a professional poker player—with them to play. Both Chidwick and Smith were joined at the final by their businessman partners, although Alfred DeCarolis (Chidwick’s partner) was knocked out in seventh, for £1.72 million, and Bill Perkins (Smith’s partner) went out in sixth, for £2.2 million. The overnight chip leader Vivek Rajkumah perished in fifth.

Zang played in the businessmen side of the draw, and admitted on several occasions that he was not as skilled as the players he outlasted in the tournament. “This shows that anyone can win,” Phua said, encouraging more recreational players to take up poker.

“The tournament has been a great success, even more amazing than we could possibly have hoped,” said Triton co-founder Richard Yong. “Not only have we made headlines across the world, thanks to the record-breaking prize money, but we have also raised at least £2.7 million for some of the most deserving charities across the globe.”

He added: “Inside and outside the poker community, everyone has been watching the tournament this week and we’ve shown just what’s possible for this game we all love. Aaron is a very worthy winner. He’s a great player, a great guy, and we are delighted that he has become the champion of the biggest tournament in poker history.”

Anna Kennedy OBE opens up about how authentic The A Word...

Operation to reduce crime and promote reassurance in Brent is a...

The Mall Wood Green has a scarily good line-up of events...