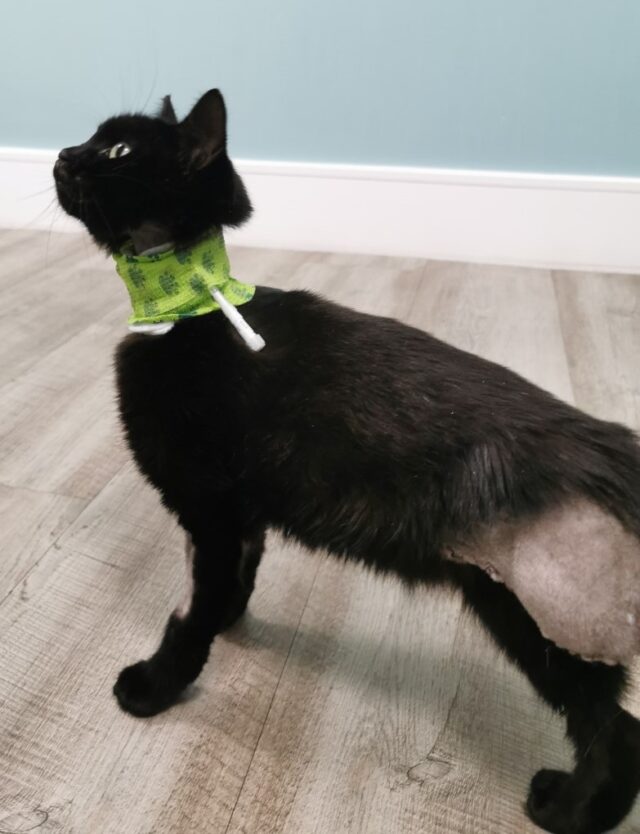 A badly injured kitten mistaken for a pile of rags on a Kent road needed major surgery that has drained the coffers of a Sutton animal charity.

Emba was a pitiful sight when she was found huddled on the central reservation of the A22, on the Kent-Surrey border. Her rescuers spotted what they thought was a bundle of discarded clothing but were shocked to discover it was a small black cat crying out for help.

Unable to resist the poorly kitten, they scooped it up and rushed to Mavern Vets in Sutton. Immediately, carers at Cats Protection’s nearby Sutton, Kingston and District Branch were summoned for support.

Close examination revealed that the kitten was no more than five months old and had sustained trauma to her face and hind leg, most likely from being hit by a passing car on the busy road.

The leg was broken in several places and the vet decided the best action for her recovery and welfare was to amputate the leg. Her young age meant that Emba was likely to get back on her paws more quickly with three good legs rather than have to undergo multiple procedures and months of rehabilitation on a shattered one.

As if that were not enough, Emba’s jaw was smashed and many tiny teeth were broken or falling out, which meant she also had to undergo significant dental work and reconstruction.

Just weeks later, Emba is recovering well. Her stitches have been removed and she is with a fosterer, learning to use her tail to balance against the missing leg. But Emba’s treatment has cost the Cats Protection branch dearly and carers are appealing for donations to pay for her treatment and recovery.

Jessica Watkins, Cats Protection’s Regional Fundraising Manager, said: “The strength of Emba’s spirit is incredible. She’s been through the wars and has the scars to prove it. But she’s a survivor, a little fighter. The treatment has already cost more than £2,500, a significant sum for any charity even at the best of times.”

“But these aren’t normal times. We haven’t been able to fundraise as normal, with events such as the London Marathon and our summer fairs cancelled. So we are appealing to our loyal supporters to help fund Emba’s treatment. Any donation large or small will help Emba and enable us to continue caring for local cats.”

Once she recovers fully, Emba will be available for rehoming under Cats Protection’s contactless Hands-Free Homing process, which matches cats online with interested new owners. During lockdown, more than 5,000 cats have been successfully homed in this way.

New register to crack down on criminals laundering dirty money