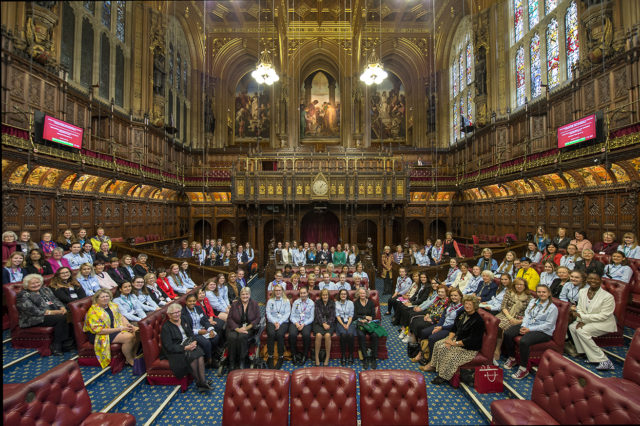 To mark the 60th anniversary of the first woman to take her seat in the House of Lords, 60 Girlguiding members from across the country have travelled to the Parliament today where they had the opportunity to shadow women peers to learn about what it’s like to be a member and the vital work they do in shaping laws and holding the Government to account on behalf of the public.

On 21 October 1958 Baroness Swanborough became the first woman to take her seat in the House of Lords following the passing of the Life Peerages Act. To celebrate this, the girls, aged 16-18, and women peers gathered in the Lords chamber for a photograph. Members who took part include Baroness Benjamin, Baroness Jones of Mouslecoomb, Baroness Hayman, Baroness Goudie and Baroness Evans of Bowes Park.

The 60 young women went behind the scenes at the House of Lords and shadowed a member where they learned how to table an amendment, techniques for writing speeches for debates and found out what it’s like to sit on a select Committee.

Commenting on the day, Leader of the House Baroness Evans of Bowes Park said:

“Today has been a great opportunity to reflect on the contribution women have made to the House of Lords and to look forward to the next generation of female leaders. I hope that today has inspired the Girl Guides to use their voices to make positive changes to issues that are important to them. I was delighted to have Charlotte shadow my team.  She is an asset to the Girl Guides and I’m sure she will go on to achieve great things.”