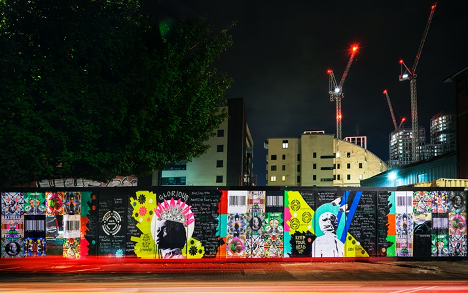 A large-scale mural acknowledging the Black Lives Matter movement has been unveiled on Freston Road in West London as part of this year’s Kensington + Chelsea Art Week celebrations. This year’s mural was decided by public vote and has been created by two local artists on a large-scale hoarding where it will stay until Christmas.

Curator Bolanle Tajudeen worked with Linett Kamala and Azarra Amoy who created the winning design for Mural #4 in response to Black Lives Matter and as part of Black History Month and the ongoing effort to redress the systematic underrepresentation of black womxn artists. The mural acknowledges local heritage and history, and social justice issues of female empowerment and racial representation. The final design was voted on by the public.

Bolanle Tajudeen, a lead tutor of Art in the Age of Black Girl Magic, a local resident and the founder of Black Blossoms School of Art – a learning platform decolonising art education, comments, “The collective feeling of desolation the Black British community endures when an individual’s life is cut short because of systemic racism is harrowing. This heartache was brought to the world’s stage in the summer of 2020 after the murder of George Floyd went viral.

Individuals and businesses were forced to look at themselves and analyze the ways in which they have contributed implicitly or explicitly to globalised behaviours of anti-blackness. In Britain, the Black community felt enraged, despaired and betrayed when they took to the streets to justly demand justice for Black life. Enraged by decades of continuous surveillance and over policing of the community. Despaired by the COVID-19 outcomes for ethnic minorities and betrayed every time a member of the Windrush community stood forward to tell their story of being treated like they did not contribute their culture and intellectual knowledge into a system which never valued their offerings but still capitalised on their labour. Analysing history it would not be wrong for Black Britons to disengage and refuse to no longer appeal to the moral sensibilities of those with power yet there is agonising hope things will change. This hope was reignited when many people from different quarters stood in solidarity to echo Black Lives Matter.”

In October 1977 when faced with the possibility of eviction, tenants and squatters living on Freston Road understood how the power of ‘community’ charged with a kindred spirit would give them the freedom they desired. By using a legal loophole and applying to the United Nations to be recognised as an independent state from Greater London, the Free and Independent State of Frestonia was born, boldly declaring to the whole world “WE ARE ONE FAMILY.” Visual symbols such as visas, postal stamps and a centered sunflower on a green flag were designed, giving the inhabitants and visitors signifiers of the new territory.

Artists Azarra Amoy and Linett Kamala are highlighting the legacy of Frestonia by reimagining what a safe state for Black people to have flourishing futures would look like. Stipulating “reparations not repatriations” on visa stamps and using calligraffiti to highlight words from protest placards from the summer of racial dissent. Images of unsung heroines and heroes from the Black community living in Britain are placed on each mural focusing on different parts of British history. 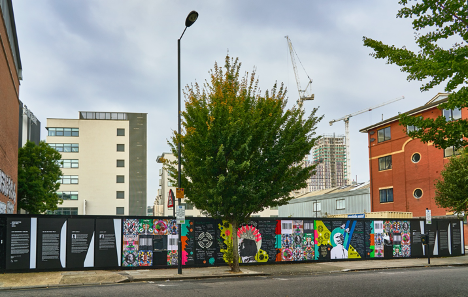 What both artists hope to achieve is for communities living and working around London’s Freston Road area to stand in solidarity with the Black community as they believe the Frestonians who all changed their surname so they could have some reprieve from unfair regeneration plans would have fought alongside the Black community, as when anything is against the wishes of the people we must come together in unity, remembering and recognizing “WE ARE ONE FAMILY” & “ALL BLACK LIVES MATTER”

Political map of Camden set to change – Have your say!