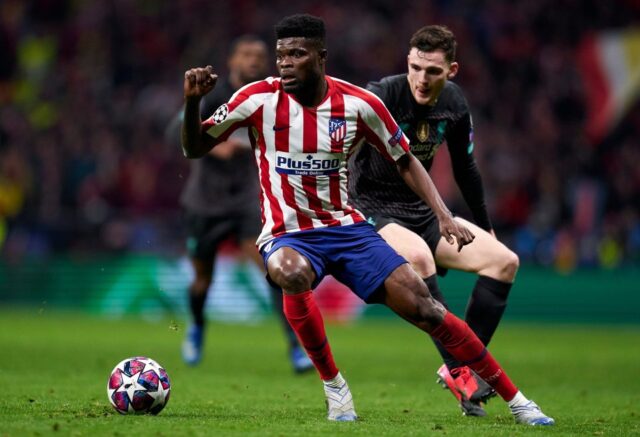 Arsenal are now priced at 3/1 to sign midfielder Thomas Partey during the upcoming transfer window after a report in the Telegraph claimed that the Atletico Madrid star wants to make the switch to North London.

The 26-year-old has a release clause close to the £45m mark and it is claimed that Atletico could consider a swap deal involving striker Alexandre Lacazette.

Partey’s father, Jacob, revealed to Ghana Web that there are talks taking place between the player and the Gunners amid speculation in the media.

Mr Partey’s claims have provided encouragement to Arsenal fans, many of whom have been enthusiastic about the prospect of the Ghana international completing a move to the Emirates.

“I called my son after hearing the rumours and he told me that the rumours are true. He told me they are holding talks between him and Arsenal. It all depends on the offer Atletico are demanding,” said Mr Partey.

One of the leading UK bookmakers, Paddy Power, are offering odds of 3/1 on a deal being made, and that price could soon drop as links intensify between the parties.

Partey is not the only man that Arsenal are favourites to sign according to the online betting site. Nabil Fekir, who almost became a Liverpool player in 2018, is as short as EVS to move to Arsenal just one year after joining La Liga outfit Real Betis.

Despite such short odds, there are a number of obstacles for Arsenal to overcome if they are to snap up the Frenchman who, reports in Spain suggest, may not be willing to leave Betis so soon unless Real Madrid or Barcelona come calling.

Mikel Arteta may need a new striker for next season, particularly if Lacazette departs, and Pierre Emerick Aubameyang – 9/4 to join Barcelona – could even be headed for the exit.

Celtic’s Odsonne Edouard is an Arsenal target as per the Express, and Paddy Power have set the odds at 5/2 for the Frenchman to become the latest Bhoys ace to try his hand down south.

Other UK football betting sites such as BetVictor also have betting odds on some potential Arsenal signings, including Dayot Upamecano, the RB Leipzig centre-back whose contract expires next summer and could be allowed to leave this year in order to avoid a free transfer in 2021.

The Gunners’ problems in defence in recent years are well documented, but if they are to lure Upamecano to London then they will have to see off competition from Bayern Munich and Manchester United who are both priced shorter at 6/4 and 5/2 respectively.

Declan Rice is another defensive-minded player with a multitude of clubs taking an interest. While Chelsea, Manchester United, Manchester City and Tottenham Hotspur are all among those linked with the West Ham youngster, Arsenal are in the mix at 10/1 with a best price of 12/1 at Paddy Power.

After the Unai Emery experiment was cut short early, the Gunners are set for another rebuild under Arteta and given the gap between them and league leaders Liverpool, there is a lot of work to be done at the Emirates if they are to get closer to the top of the table.

Activity can certainly be expected in the transfer window, and betting odds constantly change on UK sportsbooks as news and quotes surface on a daily basis.

​Appeal after shots fired in Northolt on Tuesday evening

JSMV are back with a banger!

The Guide To Managing Finances: What Can Be Done To Aid...