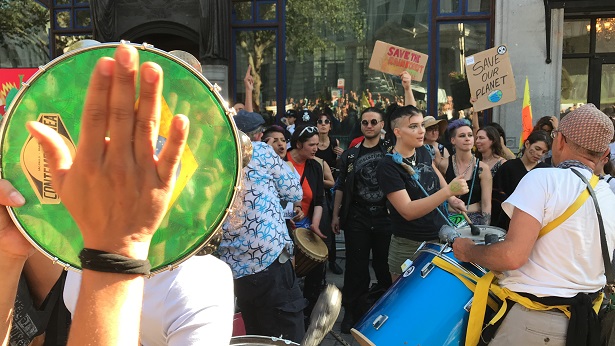 Tomorrow (3 October 2019), Brazil’s controversial Environment Minister, Ricardo Salles, will be confronted by protesters outside the Brazilian Embassy in London, demonstrating against his visit to the UK.

The UK Student Climate Network (UKSCN) and Survival International, the global movement for tribal peoples, have organised the event to send a clear message to Salles that until his government’s destructive agenda is reversed and the Amazon and its people are protected, he is not welcome here.

Salles was brought into office by Brazil’s far-right President, Jair Bolsonaro, whose government is supporting the expansion of agribusiness, mining and illegal logging. This has ignited a surge in man made fires – up 145% between 1 January and 20 August this year compared to the same period in 2018 – as land is illegally cleared. This is causing unprecedented levels of deforestation, fuelling the climate emergency and destroying the homes and territories of indigenous communities throughout the country.

Cate Davies from the UK Student Climate Network, said: “The youth climate strike movement has demonstrated that young people, right across the world, will not stand for the injustices that are being carried out against our planet and its people. Indigenous communities must be at the forefront of our fight for climate justice, and we will use our platform to raise their voices.

“We are here today, standing in solidarity with the Brazilian Youth Strikers, who have been doing all they can to fight corruption and inaction on the climate, environment and human rights in Brazil. Ricardo Salles and the Bolsonaro government must be held to account for the threats they pose to indigenous communities and their inaction on the Amazon fires.”