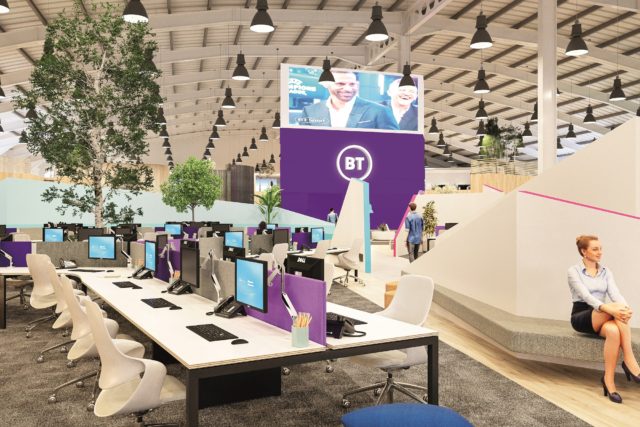 Today, BT Group revealed Ipswich (Adastral Park) as one of the first locations that will house its workplaces of the future as part of a three-to-five-year programme. Initially announced in May 2018, BT Group is set to improve and consolidate its workplaces across the UK. Ipswich (Adastral Park) is one of eight UK locations being announced today and the first to be announced in the East of England.

‘The Better Workplace Programme’ will consolidate BT Group’s footprint of more than 300 locations to around 30, containing modern, future-fit buildings, including corporate offices, contact centres and specialist sites. It is the largest programme of its type in the UK. BT’s telephone exchanges will be retained by the Group.

Ipswich (Adastral Park), Edinburgh, Belfast, Birmingham, Bristol, Cardiff, London and Manchester are the first towns and cities to be selected and will house a variety of the company’s operations. This is a clear signal that BT is committed to the whole of the UK, with locations in all four countries and their capitals. Though detailed plans of BT’s footprint in each location are still to be finalised, some existing BT buildings will be refurbished while others will see BT move into new offices.

BT Group plays an important role in the East of England’s economy and, as a result of its full economic impact, the firm supported £1 in every £55 produced in the region, according to an independent report. It also generated nearly £3bn to the region’s economy in “Gross Value Added” GVA, during the 2017/18 financial year.* BT Group employs more than 12,000 people in the East of England region.

“The Better Workplace Programme is about bringing our people together in brilliant spaces, and transforming the way we work,” BT Group chief executive Philip Jansen said. “Revealing these eight locations is just the first step; we have dedicated teams working on identifying the best buildings to move into and which ones to redesign for the future. As a result of this programme, BT people will be housed in inspiring offices that are better for our business and better for our customers.”

As announced in May 2018, BT Group will also exit its St Paul’s headquarters in London and is currently identifying a new home for the business in the capital. Further details on ‘The Better Workplace Programme’ will be revealed in due course.