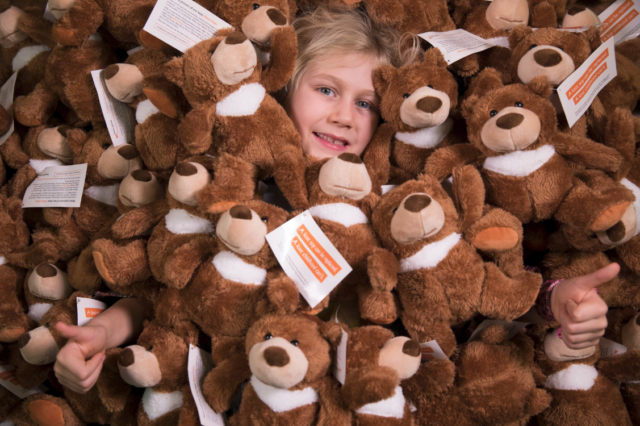 The campaign aims to raise awareness of the dangers children face in the world’s poorest communities and encourage people to sponsor a child.

Each bear (named Hope) is fitted with a tag on its wrist with directions on how people can help the world’s most vulnerable children.

To support the launch, the charity questioned more than 1,000 UK parents to find out the extreme lengths they’d go to make sure their children are not parted from their favourite toys.

According to the research, two thirds (67%) of parents in London have purchased duplicates of their child’s favourite toy in case it gets lost or damaged. The survey also found that one in four parents in Britain would be prepared to travel up to 200 MILES if their son or daughter misplaced their favourite toy.

According to the research, over three quarters of (86%) of parents in London claim that they would offer a reward for the safe return of a cherished toy, with over half of that number saying they would be willing to pay double the purchase price for its safe return. This is perhaps unsurprising given that 36% of those questioned said their child can NEVER go to bed without their favourite toy.

Laurent-Perrier places sustainability and innovation top of the menu for Taste...

THE MUSEUM COMES TO THE LIVING ROOM: CULTURE DURING CORONA VIRUS...