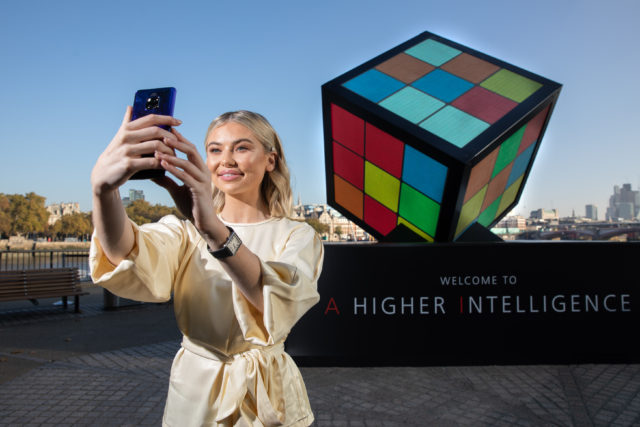 A giant Rubik’s Cube solvable by the Artificial Intelligence inside a smartphone was unveiled by Huawei on London’s South Bank to celebrate the launch of the new Mate 20 Pro – the most hotly anticipated smartphone of the year.
Huawei, the world’s second largest smartphone manufacturer, developed the 4.6m high
cube and its accompanying app by utilising the dual Artificial Intelligence capability
embedded in the smartphone’s brand new, innovative chipset. Georgia Toffolo joined
Huawei to mark the launch and played the cube using the AI inside Huawei Mate 20 Pro to
solve the classic puzzle.
It’s a game that has captured the imagination of the nation, and has firmly held a place in
popular culture for decades. Some of the world’s top academics, from mathematicians to
think tanks and universities like MIT have studied the combination puzzle to determine the
optimum way to solve it, but this is the first time a smartphone has used dual-AI power to
assist in finding the best route to its satisfying conclusion.
Huawei’s app uses AI to optimise the number of moves required to solve the cube and
outsmart the puzzle’s 43 quintillion different combinations. After the cube is initially
shuffled, each subsequent move is passed through the AI model and algorithms to give the
user hints, via the app, about what the best next move is.

Londoners Ranked Worst for Pulling Sickies in the UK

London Property Owners Use Money From Holiday Letting To Give Homes...