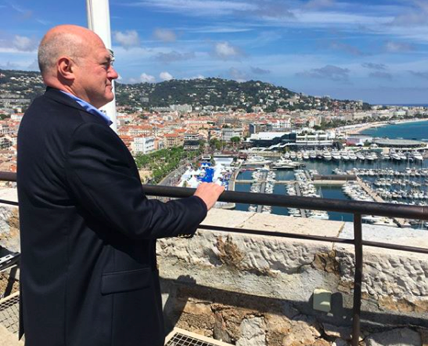 Frustrated by his rowdy students, Steve Mariotti took a chance with his 1982 classroom and introduced the concepts of business ownership in an effort to teach them math. Delighted by how engaged his students became, he soon discovered that he could actually motivate some of his most challenging students by teaching them how to run a small business. This is the story behind Steve’s latest book, Goodbye Homeboy: How My Students Drove Me Crazy and Inspired a Movement, by Steve Mariotti with Debra Devi, which comes out August 6, 2019.

Verne Harnish, Entrepreneurs’ Organization founder and author of Scaling Up comments on Steve “Steve Mariotti is one of the great teachers of our time. In this deeply personal memoir, he describes how a bunch of high-school dropouts in the South Bronx helped him discover the power of entrepreneurship education. Goodbye Homeboy is a page turner–once you open this book you won’t be able to put it down.”

We had a chat with Steve to find out more:

Being at events like the Cannes Film Festival can be very inspiring. Did you meet any filmmakers at the festival that you would like to work with in the future?

Yes, I met so many talented and smart people. I had a wonderful time with Harel Goldstein who works with the Global Genesis Group. He grew up in the industry and was so generous to me with his time and insider’s knowledge. It was enlightening to hear about how he manages three to five films per year–including the budgets, the spending and so on. Later, I met Claude Dal Farra, a biology professor turned film producer who woke up one day and decided to leave France and give the American film industry a shot. It was so inspiring to meet someone who changed careers at 40.

Your novel Goodbye Homeboy will be hitting book stores in August.  If it was made into a film who would direct it and who would play you?

I admire many directors. Clint Eastwood seems to have a quiet leadership that I find fascinating. Sofia Coppola is a huge talent–Lost In Translation truly changed my life and helped me come to terms with aging. Ron Howard is great in every way.

As for actors, I’d love to see Paul Giamatti, Richard Dreyfuss or Eminem. His role in 8 mile was  brilliant. Meanwhile, Dreyfuss’s work in The Apprentice of Duddy Kravits made me see myself as the world saw me when I was a phonetic young entrepreneur.

There are so many interesting people in Cannes during the festival, both those in front of the camera and those who are behind the scenes. Did you meet anyone there that really resonated with you?

I met so many people that were fascinating. One of the most educational parts of being at the festival was meeting people who worked on films in roles and functions that I didn’t even know existed. Even before I got to Cannes, my close friend and mentor Nell Whiting introduced me to Elizabeth Shelton, a film producer. We talked in back in Princeton about the film industry and even thought she did not attend this year’s festival, her primer made me feel like I had a brilliant coach on my team once I arrived.

Who is your favorite French filmmaker and why?

I love Forbidden Games directed by René Clément. I watch it several times a year and years ago knew the dialogue by heart.

While at the festival, did you learn anything new about yourself or the film business – or both?

I learned that I know almost nothing about the technical aspects of films and how to make them. Just like in everything else I have ever tried, the only value I bring is passion, a knack for picking talent and unconquerable tenacity. I am never discouraged. I never quit. I am never rude or negative. These are good virtues and nevertheless I know how little I know about anything. We could create a universe with what I do not know.

You can buy the book here: https://amzn.to/2Xb2kKS

Some General Tips And Tricks For Novice Online Roulette Players

KSI taunts Logan Paul with ‘GF to throw in the towel’...

An interview with industry-leading Royal Stone Care – your questions answered