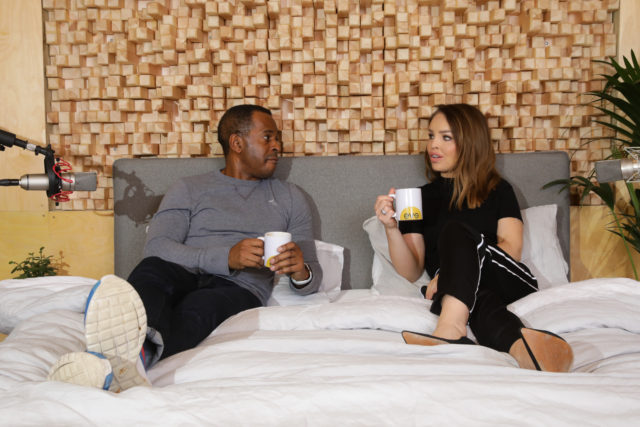 A brand-new podcast, ‘Refuse to Snooze’, has launched today – hosted by national treasure, Andi Peters, and created by sleep wellness brand, eve sleep.
In the first episode, presenter, model and philanthropist, Katie Piper, revealed her celebrity crush: “…Piers Morgan, I really fancy him”, with both Andi and Katie agreeing on Morgan’s “intelligence and great character” being attractive. Further Piers revelations came from Andi as he claims Piers enjoys 50 Cent’s “In Da Club” to get him motivated.
Refuse to Snooze podcast is a five-part series, each consisting of 9-minutes of fast-paced discussion between the king of mornings along with his aspirational and motivating guests. The series is designed to replace the snooze button, which eve sleep recently identified (with the help of experts) as being harmful to the UK’s physical and mental health. Instead of falling into sleep inertia, listeners are encouraged to wake up with Peters and guests discussing everything from careers and motivation to relationships and parenting.
In Episode one, Andi Peters discusses all things motivation with Katie Piper on what gets her out of bed in the morning, which Piper said that before kids it was her “gratitude for being alive” that gave her a “zest for life” every morning.
Katie, who runs the Katie Piper Foundation, providing help and support to burns victims also shared her favourite motivational quote “what other people think of me is none of my business”, adding “I think we spend a lot of time based on what other people think and based on comparisons and I think actually when you get later on in life you realise that’s kind of irrelevant and the earlier you realise that the better.”
The episode, available to download now, goes on to cover Katie’s personal motivational drivers, recent charity runs along with her bedtime routine, with Katie admitting she needs at least eight hours of sleep a day to function whilst Andi suggests he can get by on six.
Refuse to Snooze podcast host, Andi Peters said: “I’m really excited to be working with eve sleep as the host of their Refuse to Snooze Podcast – particularly as I am a lover of mornings and never hit the snooze button. I hope listeners enjoy the series as much as I did recording it and it becomes an uplifting start to their day for the next few weeks”.
A new episode will be released every Monday at 6.30am from Monday 8th April until Monday 6th May, with guests including ex-England rugby captain Chris Robshaw, presenter Anna Richardson, model Jodie Kidd and Olympic boxer Anthony Ogogo.
The launch of the podcast marks eve sleep ‘s latest chapter on its mission to urge Brits across the nation to refuse to snooze away their mornings. Following an open letter to apple and a report published by neuroscience and psychology experts, eve wants to educate the nation on the negative effect the snooze button is having on the physical and mental health of over 80% of Brits.
Refuse to Snooze is available to download via iTunes, Spotify, Stitcher and TuneIn.

Early Years Hubs will be set up in Newham, Wandsworth &...

The Baileys Treat Bar is Back This Christmas

Police in are growing increasingly concerned for the welfare of missing...