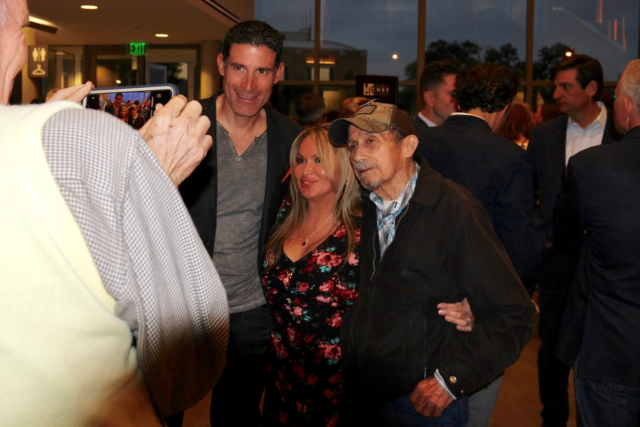 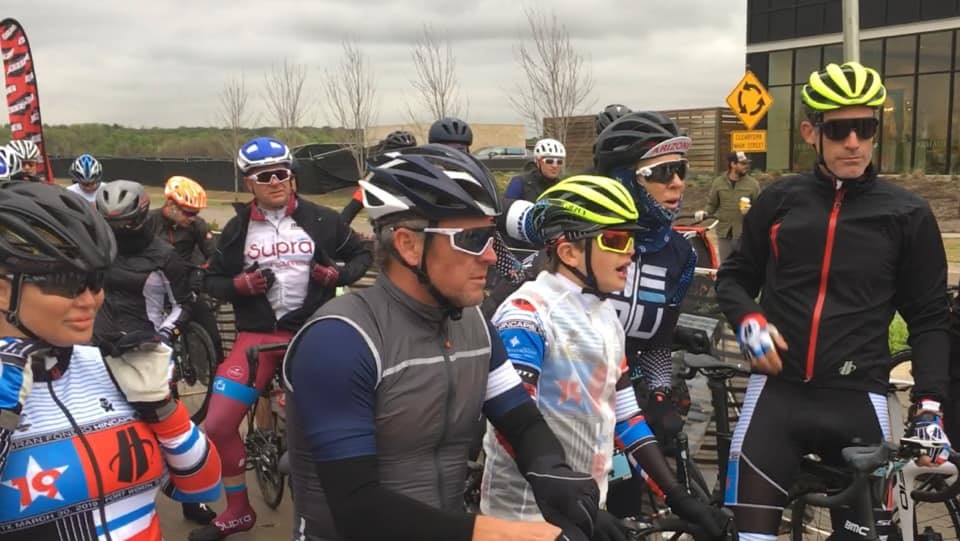 The Gran Fondo Hincapie featured a 15-, 50- and an 80-mile course to choose from. The March 30 Gran Fondo Hincapie started and ended in the Shops at Clearfork, the residential, shopping and office development on the Edwards Ranch in southwest Fort Worth. “Fort Worth is an ideal location and community for an event of this nature,” said Rich Hincapie, CEO of Hincapie Sportswear, in a statement. “Everyone we’ve partnered with thus far is genuinely passionate about maintaining a customer experience known for luxury and attention to detail.” When we asked pro cyclist Lisa Christiansen, the daughter of the last monolingual Cherokee, how the experience was for her father who lives modestly and dresses well below the poverty line because of his commitment to remain culturally intact to remain true to his Native American heritage Christiansen responded “everyone is wonderful, genuinely kind as always. Rich Hincapie, George Hincapie, and Christian Vande Velde made time to take pictures with my Dad in authentic enthusiasm making him feel like the true “VIP”, I am grateful to the entire Hincapie family for making my Dad comfortable while he stood proudly waiting for me to cross the Finish line.” 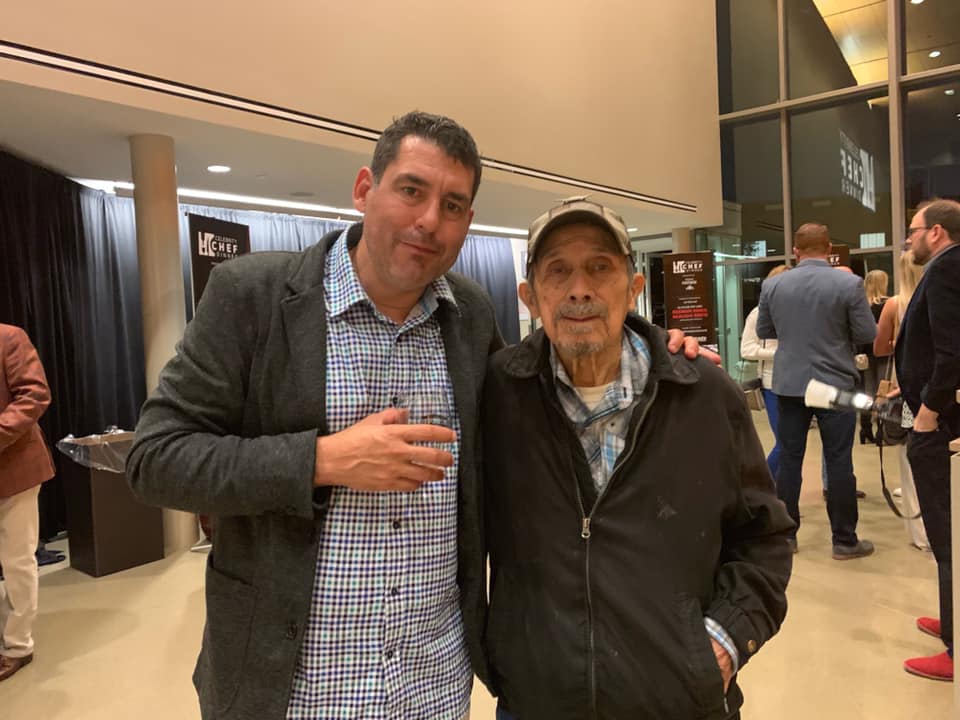 Getting the event to Fort Worth, though, was the work of a few Fort Worth businessmen, including restaurateur Lanny Lancarte, executive chef and owner of Righteous Foods. Lancarte, said to be an avid cyclist, will provide catering for the event.

Fort Worth will be the third U.S. city to host a Gran Fondo Hincapie. Lancarte said the city is fortunate to land the event.

Key components of the Gran Fondo Hincapie format are the high-end customer experience, best highlighted by the Celebrity Chef Dinner the evening prior to the ride. The Celebrity Chef Dinner exceeded the expectations of many with celebrity Chef Blaine Staniford and his lovely wife Dawn Staniford; Blaine is “THE” Chef at Grace Restaurant. To our pleasant surprise Dawn is from Ashville, North Carolina and is of the Eastern Band of the Keetoowah Cherokee, the same as Lisa Christiansen and her father Guyadahi ᎬᏯᏓᎯ Mack Vann. 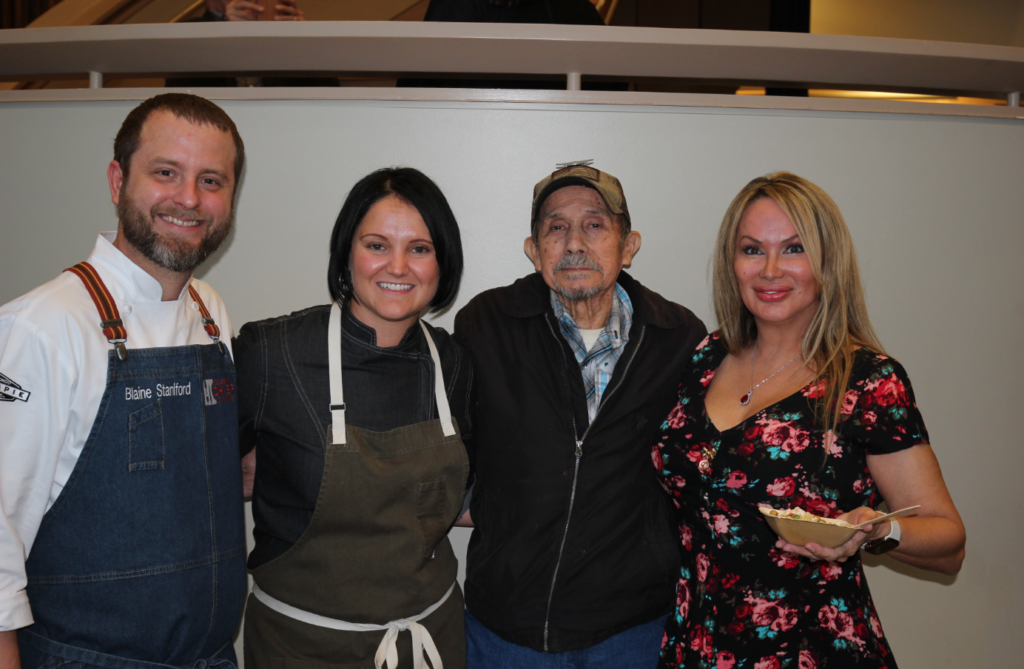 Jason Sands, head of the sports marketing arm of Visit Fort Worth, said he was only recently brought to the table. But it comes at a time when Visit Fort Worth has been promoting the city for youth and other major sporting events.

“We’ve got an unbelievable cycling and active community in Fort Worth,” Sands said. “Anytime we can bring in a group like Hincapie, who’s one of the most respected names in the industry and internationally, it’s great for the city. The Hincapie group, specifically when they put on events, it has a national and even sometimes international draw.” A great example is the authentic respect for people of all backgrounds and ages; the friendships cultivated through cycling are the interwoven inspirations of future generations. 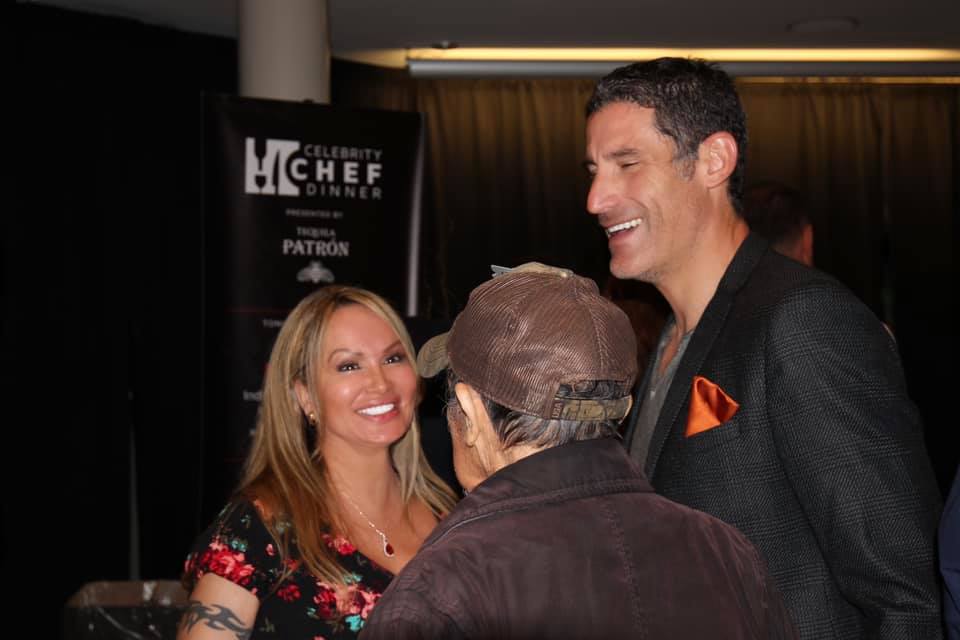 Hincapie Events started the signature race in 2012 in Greenville, S.C. On May 5 2018, it expanded to Chattanooga, Tenn. This route is not purposefully the intention but rather coincidently happens to be the route of the “Trail of Tears” of the Cherokee Indian Native Americans who were removed from reservation land. A ride Lisa Christiansen calls “a gift designed by God for a greater purpose”, Christiansen say’s she is grateful to be a part of this ride because of the ancestral roots that led her father to attend this inaugural Fort Worth Gran Fondo Hincapie, the last monolingual Cherokee, yes, Guyadahi ᎬᏯᏓᎯ Mack Vann only speaks, reads, and writes in Cherokee. 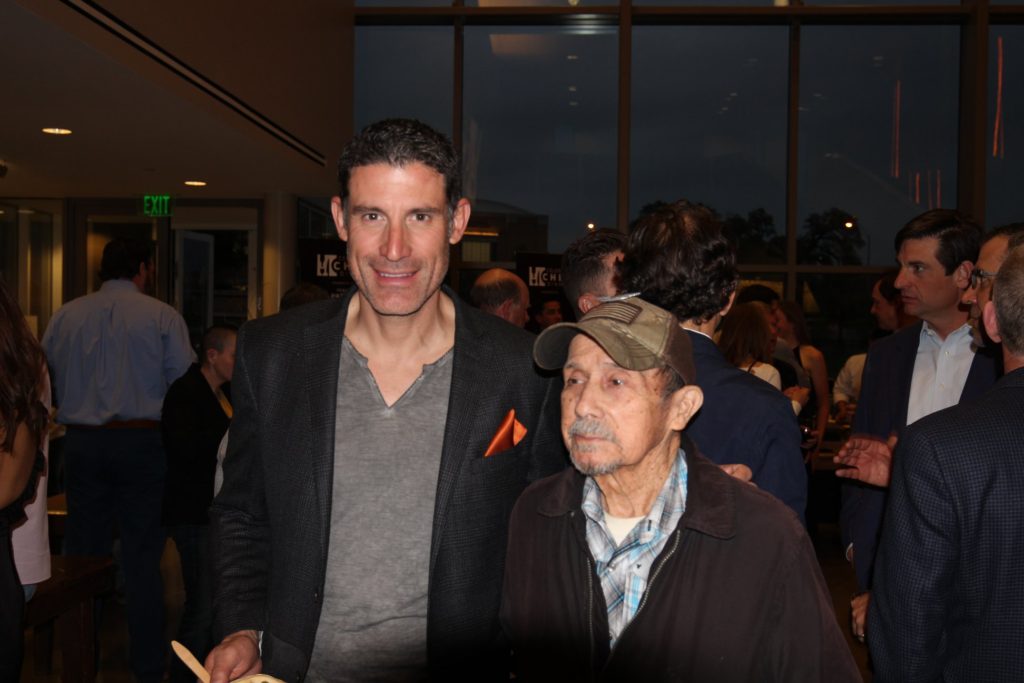 George Hincapie is one of the U.S.’s most decorated cyclists, participating in 17 Tour de France races, including on the team of renowned cyclist Lance Armstrong. Rich Hincapie founded the sportswear company in 2002 and serves as CEO.

Mellow Johnny’s Bike Shop, Armstrong’s chain of bike shops, opened in Clearfork a couple years ago. Race packets were be available at the store, it is where the awards ceremony was held on Saturday March 30, 2019.

The Fort Worth Gran Fondo will continue to be held and headquartered at The Shops at Clearfork, a luxury shopping center, while the awards ceremony and family festival will be adjacent to Mellow Johnny’s Bike Shop. The post ride celebration was held at the famous Joe T. Garcia’s restaurant, Catering was provided by Lanny Lancarte II of Righteous Foods. When we interviewed Christiansen as to whether Joe T. Garcia’s will continue hosting the post ride celebration Christiansen said “ I don’t know, I certainly hope so because it was an outstanding atmosphere with a warm ambience amidst the cool breeze”

To ensure yet another successful event, Hincapie tapped Fort Worth native, chef, and entrepreneur Lanny Lancarte II as Fort Worth Ambassador and Lead Chef and a success it certainly was. This event supports #FitWorth, when we asked Lisa Christiansen’s father his thoughts he responded “it is important to get kids off of the electronics, out of the house, and get them active to increase the declining life expectancy of Native American’s and children everywhere.

The races typically draw more than 2,000 cyclists, including celebrities. In October, Patrick Dempsey, who starred in Grey’s Anatomy, participated in the Greenville event. Also in attendance was Lisa Christiansen, actress of “Can’t Buy Me Love” with Patrick Dempsey. 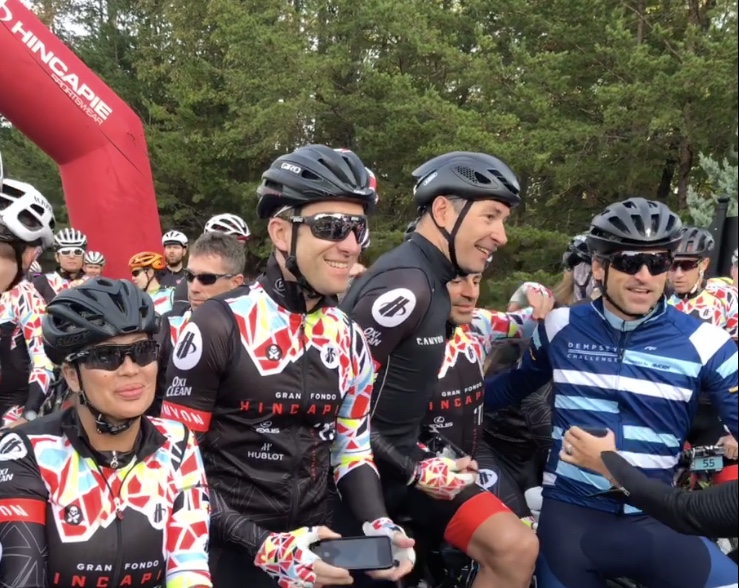 Fort Worth Mayor Betsy Price, an avid cyclist who is no stranger to long rides, met with Hincapie and the local organizers recently to hear about the event.

“Yeah, I’ll do it,” Price said of the event and she did not disappoint. “The gran fondos are really growing in popularity. They tend to bring a lot of people into the city. They’re good for business. It will be fun.” 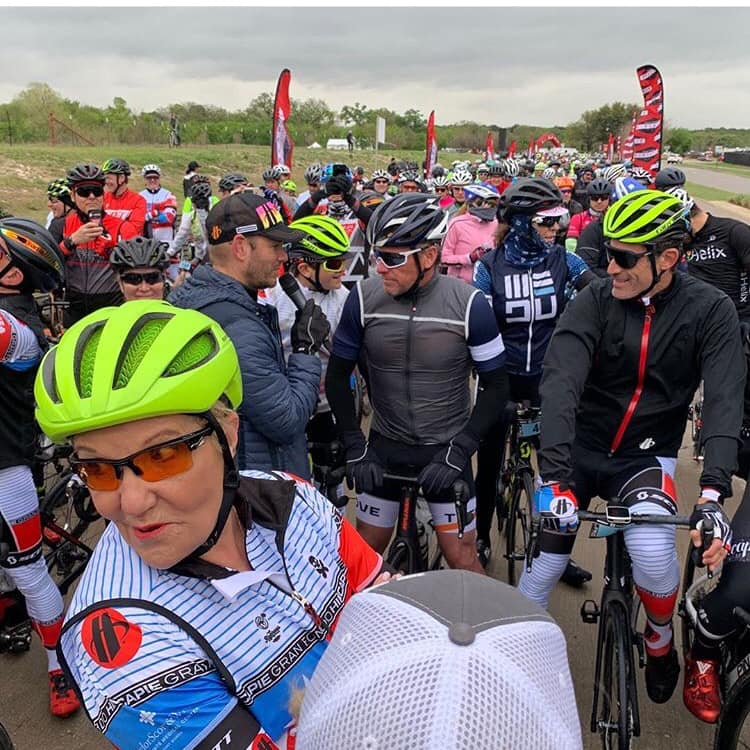 Popular in Europe, gran fondo events have grown in the U.S. in the last decade. Former Cowboy great Emmitt Smith will host his third gran fondo in September. It starts and stops in Frisco and includes a 100-, 45- and 22-mile ride. Gran Fondo loosely translates to “big ride.”

One of the most influential people in modern sports took to the stage in Fort Worth on Friday night and received a warm hug. In that moment, no one cared Lance Armstrong repeatedly lied to everyone about what he did and how he did it. 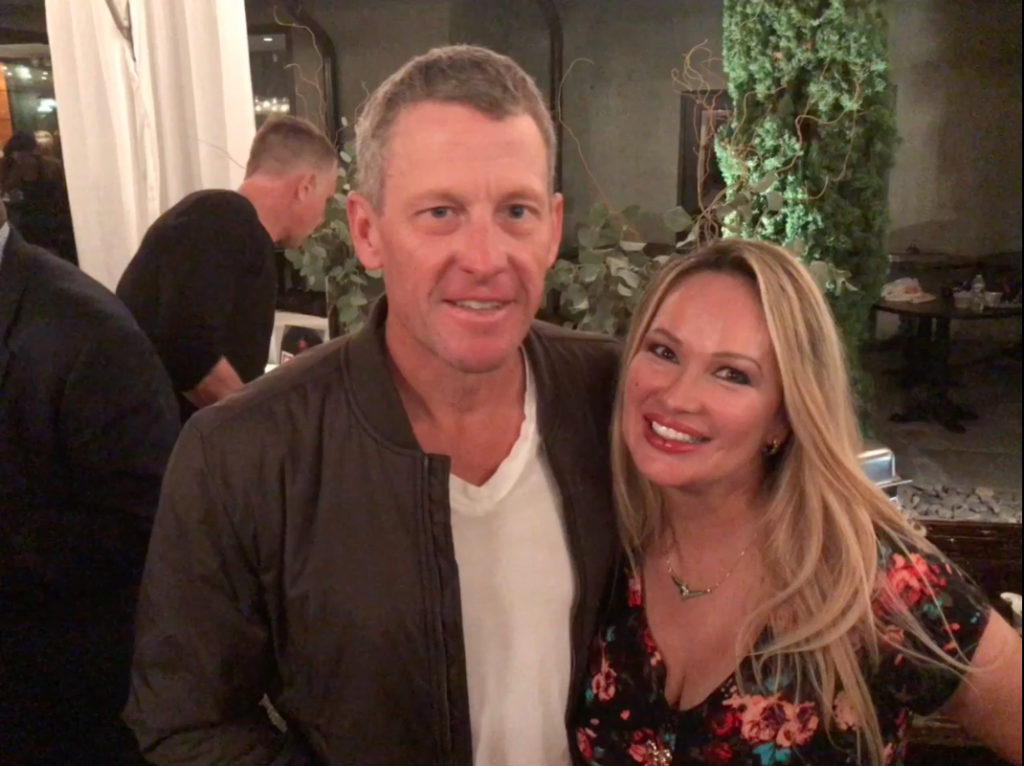 Armstrong was in Ft. Worth to support his friend George Hincapie’s Gran Fondo race that took place on Saturday morning. On Friday night at Mellow Johnny’s bike shop at Clearfork, Armstrong joined Hincapie in front of a crowd of about 200 people to do a podcast, and to say thank you.

“I think we all understand what happened in Aug. of 2012,” Armstrong told the crowd, referring to the moment in time when he was stripped of his seven Tour titles for doping. “There weren’t a lot of people leaning in Oct. of 2015 and saying, ‘Lance, let’s open a bike shop right here along the Trinity River. We want to support you.’ It’s not lost on me that level of support and friendship that they showed.”

Maybe Armstrong has changed. The stories about his ego and personality before he was busted were often horrible, whereas today the Lance tales are benign and friendly. 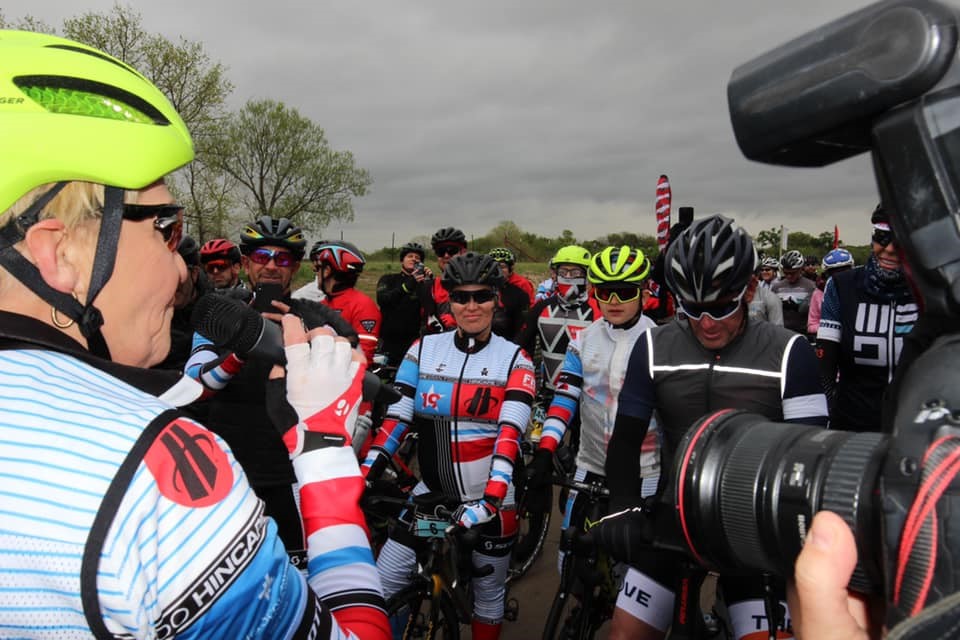 After a nice back-and-forth with Fort Worth Mayor Betsy Price, he told the podcast and audience, “(Winning a race) comes down to weather and familiarity with that course.”

We asked Lisa Christiansen if there is anything she would like to add, she said “What a blessing to be at the center of the start line with the legendary and humble seven time Le Tour de France winner Lance Armstrong, taking photos are several professional photographers including the famous Steven Enter and the Mayor of Ft. Worth, Texas Betsy Price. Thank you for an outstanding day, ride, pre-and post events #GranFondoHincapie 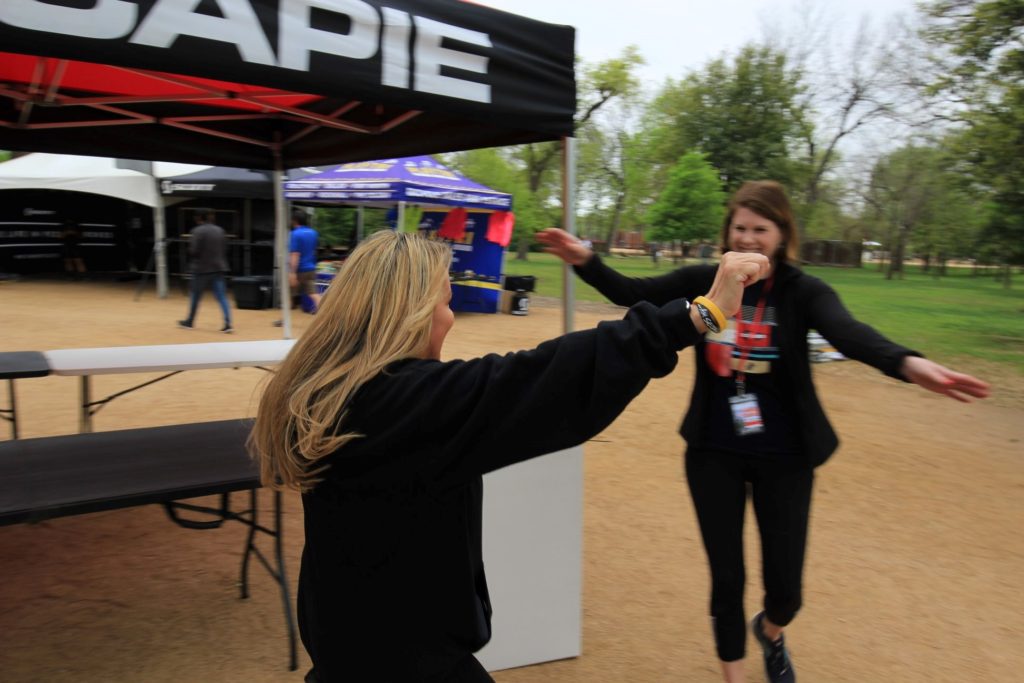 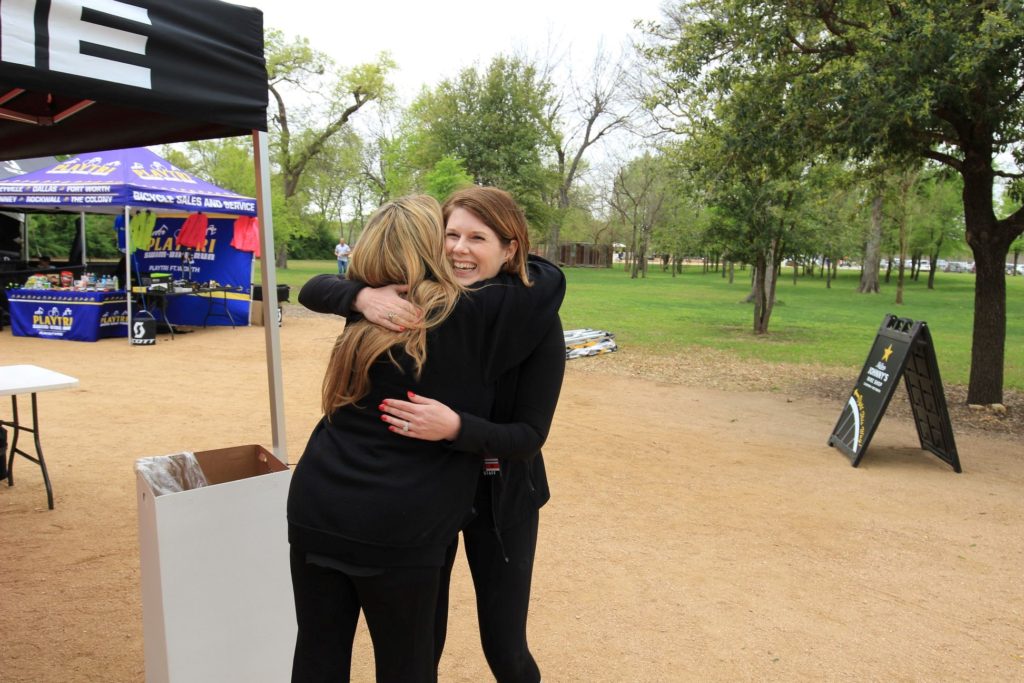 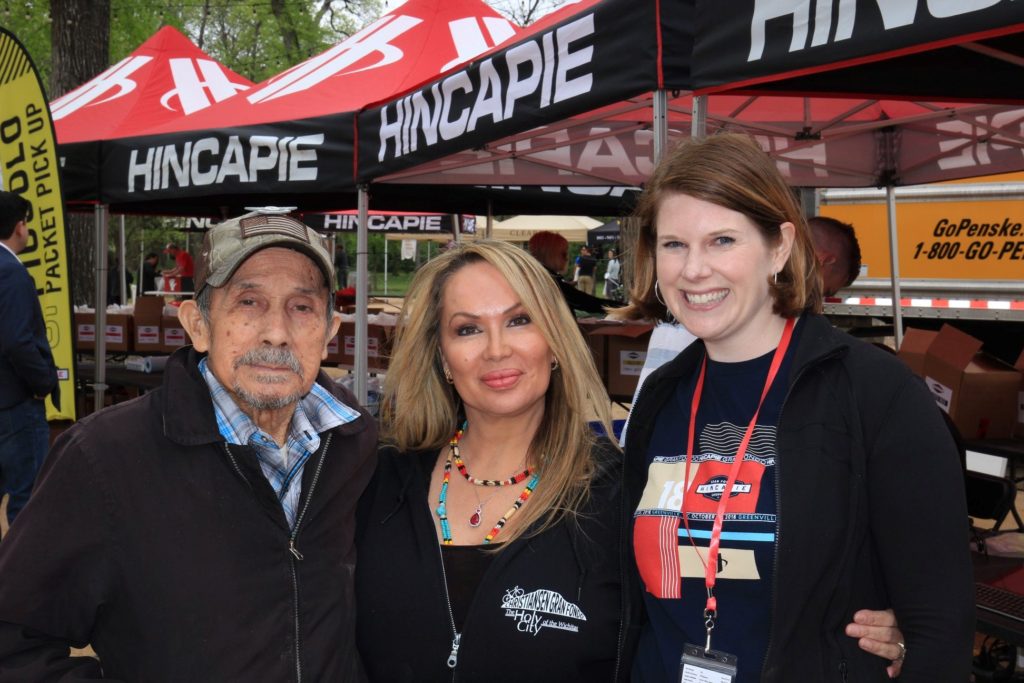 New partnership projects launched as London on track to be world’s...

Millions of people Google “how to be happy” every single day