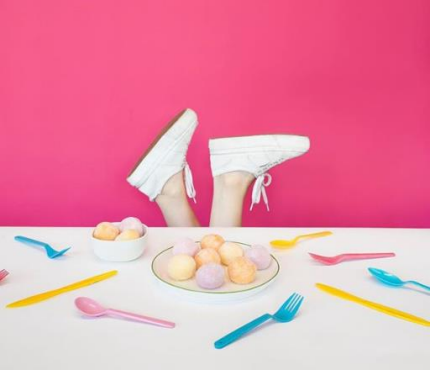 Move over cupcakes and eclairs. Little Moons, colourful, bite-sized, moreish mochis
filled with artisan gelato ice-cream, are now the next big thing in desserts. So much
so, that one is eaten every three seconds!

Now anyone who has not yet succumbed to their myriad charms is in luck. For over the next few months Little Moons pop ups will be appearing all over the capital.

First up it’s in Westfield London in Shepherds Bush, where you’ll be able to get your
hands on these decadent treats from May 1st for no less than six months. Meanwhile
Bond Street tube station, in the heart of one of London’s most prestigious areas, will
be hosting its pop from 8th May to 4th August.

These are just two of the sites confirmed to date. Keep your eyes peeled for more to
appear throughout the summer.

It was back in 2010 that siblings Vivien and Howard Wong pledged to bring Japan’s
best-kept secret to the masses.

They spent the next two years mastering the mochi making process and perfecting
the ice cream recipes, working with top chefs and using quality ingredients to create
the perfect array of traditional and contemporary flavours. Since then Little Moons
have been proudly spreading millions of moments of joy, one bite-sized ball at a
time, not just in the UK but from Sweden to Spain and Saudi Arabia to Dubai!

The lovingly hand-made mochis are made from a natural gluten-free rice flour dough,
which is beaten to a soft and chewy texture, so it’s light and airy and melts in your
mouth. The combination of a velvety outer and a creamy centre is a decadent indulgence to savour.

And with six irresistible flavours to choose from – Alphonso Mango, Uji Matcha Green Tea, Sumatran Coconut, Madagascan Vanilla, Himalayan  Salted Caramel and Vegan Belgian Chocolate – everyone can have a mochi moment to suit their taste buds.

If you just can’t choose a flavour, the Pick & Mix summer range is available to choose from – Black Espresso, Strawberries & Cream, Yuzu Lemon, Italian Hazelnut. The delicious range starts from £1.50 per ball.

Little Moons are available all year round in Whole Foods, Japan Centre, Waitrose, Ocado, Amazon Fresh, As Nature intended and Selfridges Food Hall, priced at £4.99 for a box of six.

Want to be a real-life Richard O’Brien? The Crystal Maze LIVE...

Could you offer respite care to some of London’s four thousand...