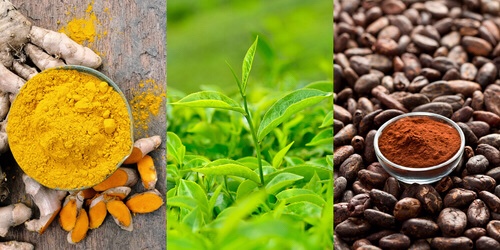 With Christmas over and New Year resolutions looming, most people are looking to popular superfood ingredients, especially turmeric, matcha tea and cocoa, to help them recover from the festive excesses.

London-based nutritionist Georgios Tzenichristos has looked into the benefits and nutrient content of each of these popular superfoods and has come to some surprising findings.

According to Georgios, each of these food ingredients have a key active molecule, responsible for the vast majority of their health benefits. Turmeric has curcumin, green tea has a molecule called EGCG while cocoa contains flavanols, all at different concentrations in relation to each other. So which super-ingredient is more “super” than the rest?

“It’s a no brainer”, Georgios comments. “If I had to choose one of those famous actives, that would be the humble green tea. A cup is easy to prepare, costs next to nothing and provides you with a whooping 7% active molecules (EGCG), the most of any other drink or food. This is in contrast to to turmeric, which is a hassle to prepare and only contains 2% active (curcumin). Plain cocoa fares even worse, as it usually needs milk and sugar to be palatable and only contains 0.5% actives (flavanols).

All three superfood actives have quite similar yet diverse health benefits, with curcumin more known as an anti-inflammatory, EGCG well known as an all round antioxidant and cocoa flavanols renowned for their cardiovascular health benefits. So looking at the evidence, no scientist can really agree on which ingredient is best, quality-wise.

During National Volunteers week, the Met is shining a light on...

Norma Goldman on Vegan’s: “Make sure you’re getting all the right...

Londoners’ top 25 activities during the lockdown