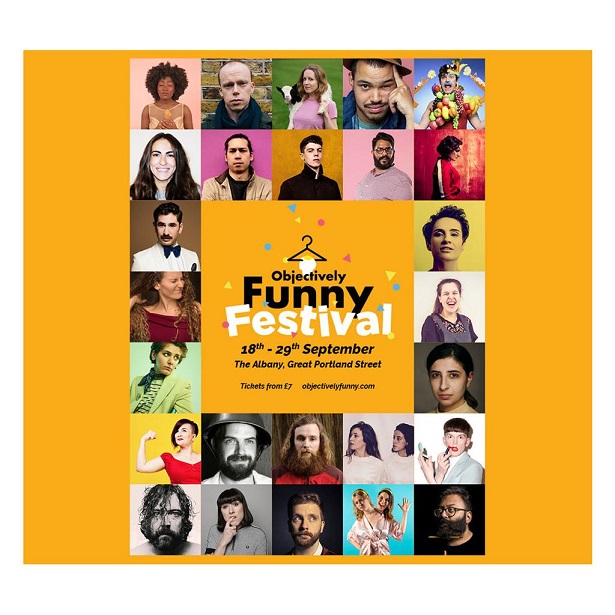 Objectively Funny Festival returns to the Albany with 42 shows over 12 days, showcasing what the Guardian has dubbed “the art form’s cutting edge.” Retaining its low prices and grassroots mentality, the festival will be coming off of the back of Objectively Funny’s success as a production company in Edinburgh, where 10 shows were taken up to the Fringe to critical acclaim, and a mental health campaign was run in support of performers and festival employees.

Opening with a critically lauded and multi award-winning pair of stand-ups in Jen Brister (Live at the Apollo) and Maisie Adam (Mock the Week), the festival will encompass acts from all over the comedy spectrum for eleven days out of twelve in one single venue.

A number of the year’s buzziest shows will be making their way to the central London venue over the month, such as Edinburgh Comedy Awards Best Show winner Jordan Brookes and nominee Jessica Fostekew. There will also be longstanding Fringe favourites such as John-Luke Roberts, Pierre Novellie, Laura Lexx, Rob Auton and Roisin & Chiara. In what is now tradition for the festival, there will also be a number of highly-rated acts presenting their debut shows, such as Edinburgh Comedy Awards Best Newcomer nominees Sophie Duker, Huge Davies and Helen Bauer.

The festival takes place at the historic Albany pub on Great Portland Street, a comedy room since the ’80s and the location of Bob Monkhouse: The Last Stand, filmed for the BBC. It has been curated by Martin Willis, who fronted the organization’s mental health campaign in Edinburgh and the programmer at the Albany, which has invested heavily in comedy since he took the position after this festival last year.

The festival is priced as low as possible to ensure it is both affordable for the public and equitable for the acts. During the weekend, seats can be reserved for £7 per show or all-day passes can be purchased for as low as £18 for six shows. Weekday/Friday shows start at £8 each, or £15 for a double-header. There are concessions rates for all shows.

What are the pros and cons of buying a German car?