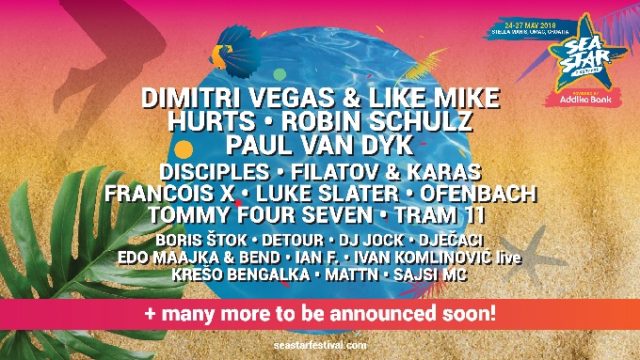 The magical Stella Maris lagoona in beautful Istrian city of Umag, Croatia, Sea Star festival will host the powerful techno heroes – British techno lord, Luke Slater, leader of the new Parisian scene, François X, and the virtuoso of Berlin, Tommy Four Seven! This killer trio will be support-ed by the current regional No.1 DJ Jock, as well as the Slovenian cult producer Ian F, and the Zagreb star Ivan Komlinović, whose sets will launch the festival party season of the summer, from May 24 to May 27 in Umag, Croatia.

Umag, a beautiful Istrian town at the north of the mind-blowing Croatian seaside, isn’t just a breathtaking combo of baroque and renaissance and Mediterranean climate. With a number of attractions and a lagoon that has an almost-unreal color and with cocktails served day and night, this Croatian town is the perfect site for those endless marine nights on the beach and energetic parties combined with new friends, fun in the sea and new blossoming love. Idyllic coastlines, picturesque views, unique architecture, culture and gastronomic delights mixed with exciting festival for the perfect festival break.

All fans of Sea Star fans can buy festival tickets at the price with 40% discount! Apart from regu-lar festival tickets, VIP Gold tickets are also available at the price of 100 EUR +b/f. Festival offers the variety of accommodation. Check out the special offer for the 4* Sea Star camp, including electricity, drinking water, showers, toilets and everything you need, all only 100 m from the festi-val and the sea! Visitors can also book accommodation at Umag hotels, villas and apartments, all of them between 100m and 1km distance from the festival. Accommodation and travel arrange-ments for Sea Star with packages combining the ticket, accommodation and transport can be found at Sea Star official website.