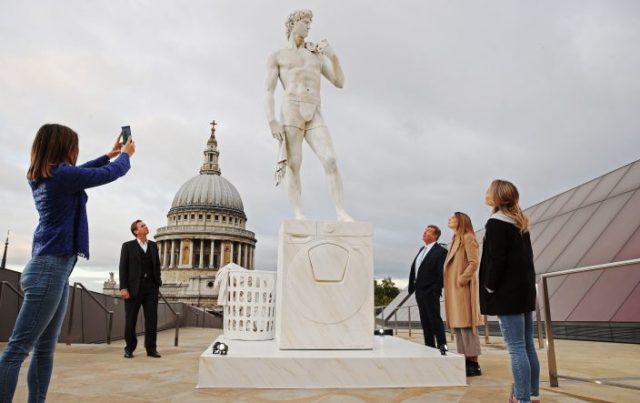 Two of the world’s most famous male statues have been spectacularly reimagined as domestic gods for a bold new Samsung campaign.

The figures, which have been installed around central London, feature near-identical versions of the original masterpieces bar a few unmissable, cheeky tweaks.

Michelangelo’s David has been recreated wearing briefs, with a shirt flung over his back, as he takes charge of the weekly wash while Rodin’s The Thinker poses, deep in contemplation at a washing machine.

Each statue took a six-strong design team two months to create, working from a variety of sources to recreate a faithful rendition of each sculpture in microscopic detail.  The reimagined statues of iconic male nudes give a humorous nod to revealing new Samsung research which found that 75% of men have little or no idea how to operate the domestic appliances they have at home.

The original David, located in the Galleria dell’Accademia in Florence, took Michelangelo more than two years to build and weighs the equivalent of eighty men. Rodin’s bronze sculpture The Thinker, revered for its contemplative posture, resides at the Musée Rodin in Paris.

The new artworks are of course, open to interpretation – just as the originalThinker invites us to debate as to whether he is in either a contemplative or mourning pose, Samsung’s modernized male subject could be interpreted as being in a state of confusion, as he ponders which wash cycle to select.

Samsung’s ‘Modern Masterpieces’ campaign has been designed to highlight the durability and flawlessly-rendered design credentials of their Home Appliance range which includes the revolutionary QuickDriveTM washing machines featured in the sculptures.

Samsung’s QuickDriveTM washing machine went through over 150 different tests (tested thousands of times over), before being released to market.

Londoners are bored of Bucks Fizz, but what to start off...

Orpington residence get chance to do battle with Premier League darts...

Research reveals 1 in 3 young Londoners are put off seeking...