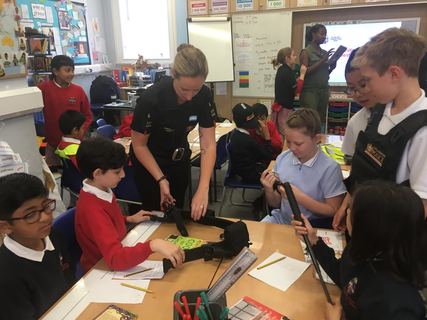 The City of London Police is pleased to announce its Mini Police pilot scheme which was launched on Friday 8 June 2018 at Sir John Cass’s Foundation Primary School in the City of London.

The pilot scheme will be delivered by the City of London Police’s Economic Crime Directorate and its Community Policing team. It will run for three weeks and will see 19 children, aged 8-10 years old from the primary school learn about how to protect themselves from cyber crime and how they can share this knowledge with friends and family.

The children will also learn what it means to be a police officer and the importance of working with the public to protect them from crime. One of the sessions will see City Police Officers, teachers and the Mini Police give out Action Fraud’s cyber crime prevention leaflets to members of the public in and around Liverpool Street Station. At the end of the pilot, they will visit the City of London Police Museum to gain an insight into the history of the City of London Police.

Temporary Commander Pete O’Doherty launched the pilot at the Sir John Cass’s school and issued the children with their uniform which has City of London Police branding. For each of the sessions, the children will wear their uniform to help them consider the role of the police and the importance of learning about cyber crime to not only help themselves, but others too.

Five Reasons Why Every Business Should Use A Vpn

What do Premier League footballers use to style their hair? Interview...