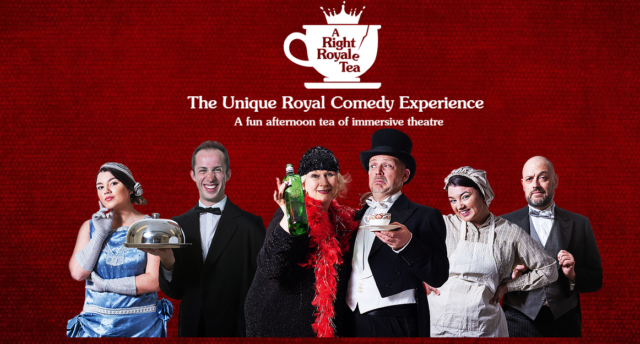 Join Lord and Lady Right in A Right Royale Tea – a hilarious immersive and participatory comedy afternoon tea performance set in the grandeur of the British aristocracy – in London this Summer, performing at the Amba Hotel, Charing Cross London every Sunday from 23rd June, with a half price preview on Saturday 15th June.

Guests will join the fictitious Lord and Lady Right, and their servants, as they try to raise vital funds to save their crumbling castle in this unique and original comedy dining experience.

As Lady Right gets more and more tipsy throughout the fundraiser, Lord Right is on the lookout for a handsome (and rich) suitor for his beloved daughter, Ginny, who is more into Harry Potter than Prince Harry. Richard, his lawyer, is desperately trying to keep everything in order, whilst trying to ensure the entertainment arrives on time. Will the mysterious painting raise enough cash to save the Right family? And who will save the day?

Expect unexpected 1920s elegance and a stiff-upper lip during a delightful traditional afternoon tea including scones, sandwiches and cakes. With mischievous maids, boisterous butlers, a magical daughter and a sumptuous songstress, what could possibly go wrong?!

In A Right Royale Tea, the audience is part of the show – actors mingle and interact with the diners, with each actor portraying a character as the story unfolds. Some of the performance is improvised, drawing from topical events and audience participation, with the remaining following a scripted narrative.

Created by BoRo Experiences founder Dominic Wong, directed by Jo Michaels-Barrington with script consultation by Andrew Muir, the first-of-its-kind performance brings together an afternoon tea and a Royal experience like no other to the wide variety of tourism products in the UK.

With the comedy dining genre already established, creator Dominic Wong commented: “The inspiration for A Right Royale Tea came from the need for a fun ‘Royal’ experience that is missing in the marketplace and one that tourists crave. The Royals have witnessed a modern revival of late, with the arrival of another Royal baby as well as the multitude of movies and TV series making a splash (including a forthcoming series of The Crown, Oscar-winner The Favourite through to the Downton Abbey movie released in September). Combined with a unique take on the traditional afternoon tea, A Right Royale Tea will deliver a truly British, standout experience”.

The cast includes Giselle Summers as Lady Right and Jason Taylor as Lord Right, Chloe Brown as maid/daughter, Bruce McIntosh as Richard the Lawyer and Carl Christopher, who plays Patrick the Butler.

Performances take place at the Amba Hotel, Charing Cross, London, starting with a preview on Saturday 15th June, and then every Sunday afternoon (23rd June 2019) from 2:30pm until 5pm throughout the Summer. Tickets cost £69.95 per adult, £59.95 for children under 12 and £64.95 student and senior citizen concessions, with an option to upgrade to the prosecco package at £77.50 per adult. All tickets include the comedy dining performance and afternoon tea including scones, sandwiches and cakes.

Royal Opera House unveils biggest programme of streamed ballet and opera in its history, just in time for Christmas

Meet the women who deliver joy in Surrey and Sussex