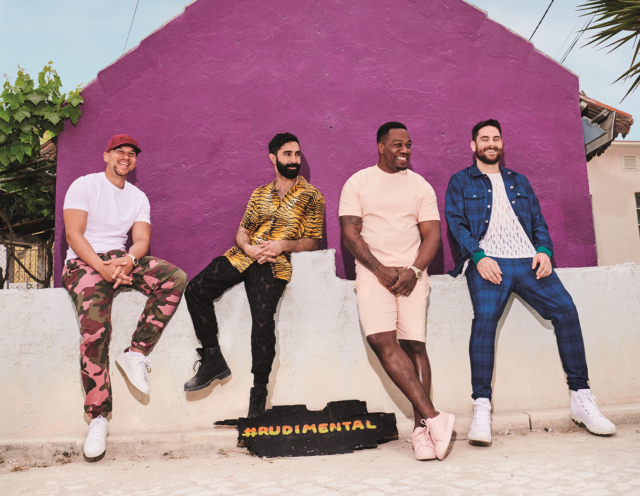 With two number one albums and three number one singles already under its belt, including debut ‘Feel the Love’ and ‘These Days’ ft. Jess Glynne, Macklemore and Dan Caplen, Rudimental has sold over 20 million singles and over 2 million albums to date. The DJ band brings these hits alongside tracks from its current critically acclaimed album, ‘Toast To Our Differences’, written as an emphatic celebration of difference and a coming together of cultures, styles and sounds, to Edinburgh’s Hogmanay. The album is the product of the band’s past three years of work and boasts an extraordinary list of collaborators including; Rita Ora, Ladysmith Black Mambazo, Chronixx, Eli Ingram, Hak Baker, Maverick Sabre, Olivia Dean, Protoje, Shungudzo, Kevin Garrett and Raphaella.

Completing the Hogmanay in the Gardens line up, with an international DJ hat trick is Mungo’s Hi Fi, the Glasgow-based soundsystem and production unit who pull off that rare trick of making reggae/dancehall that is original and of quality. Created over a decade ago by two likeminded DJ’s, which has now grown into a collective global operation with six members: all committed to spreading their philosophy of serious, seismic productions plus easy-going democratic dancehall fun. So far they’ve released nine albums featuring this ensemble of talented artists, including: 2009’s Sound System Champions, 2015’s You see me star and 2016’s No wata down ting and collaborated with Jamaican legends such as Sugar Minott, Ranking Joe and Johnny Clarke to contemporary artists like Eva Lazarus, Charlie P, Kenny Knots, YT, Solo Banton, Parly B and Marina P.

Rudimental DJ and Mungo’s Hi Fi join Hogmanay in the Gardens headliner, Academy Award, Grammy and Golden Globe-winning artist, DJ and producer, Mark Ronson and guests to complete the line-up and create what will be a non-stop party set to back to back massive hits, dance floor classics and absolute anthems, making Edinburgh the place to bring in the New Year, as if there was any doubt!

The full programme for Edinburgh’s Hogmanay including the Torchlight Procession, Street Party, Ceilidh Under the Castle and Loony Dook is now available via edinburghshogmanay.com

Charlie Wood and Ed Bartlam, directors of Edinburgh’s Hogmanay, said; “Rudimental have had some of the biggest chart-topping tracks from the last six years and we simply cannot wait to create a new unforgettable moment for Edinburgh’s Hogmanay when thousands of partygoers belt out the band’s absolute anthems together on the 31st December. Glasgow’s own collective soundsystem, Mungo’s Hi Fi are really going to get the party off to a proper start with their unique blend of seismic productions plus easy-going democratic dancehall fun.”

“Mungo’s Hi Fi, Rudimental and our headliner for Hogmanay in the Gardens, international superstar DJ Mark Ronson. What better way to welcome in a new decade, than partying to the biggest hits from the last decade from the best DJs of the decade!? 2019 is the year Edinburgh’s Hogmanay really shows the world how to party!”

Rudimental DJ said; “We’re so excited to be part of the line up for Mark Ronson’s Hogmanay in the Gardens. There’s no better place to celebrate New Year’s than Edinburgh!”