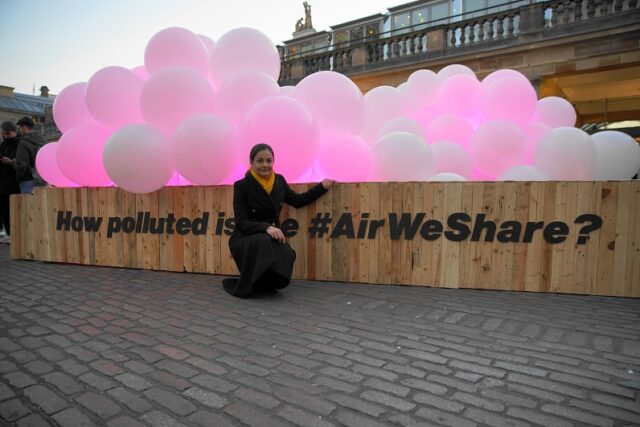 LibDem mayoral contender Siobhan Benita visited the pop-up Pollution Pavilion in Covent Garden. The pavilion is from environmental campaigning charity Hubbub to help the public visualise what air pollution looks like. It’s in the Covent Garden Piazza until Sunday.
“London must be a world leader on the environmental. That’s why I’m putting this at the heart of my agenda for a safer, greener, kinder London” – says LibDem mayoral contender Siobhan Benita
“We are facing a climate crisis and London must be a world leader on environmental issues. That’s why I’m putting the environment at the heart of my agenda for a greener, safer and kinder London.  As we build up to the election for a new Mayor of London in May, I’ll be announcing a package of measures to make London a zero carbon, low waste, no plastic city.  These will include moving away from petrol and diesel cars, more pedestrian and cycling spaces, upgrading our public transport network so that it is green, clean and accessible, standardising recycling across the capital and working with businesses to eradicate waste and single-use plastics.
“It’s jarring to hear the current mayor Sadiq Khan inflate his green credentials when he’s been so disappointing.  With just a few months until the mayoral election, he is still promising to make public transport greener yet during his term in office he’s converted only a tiny fraction of the capital’s buses to electric – and has presided over illegal levels of air pollution in the capital.  What’s more, he closed one of London’s greenest bus routes, the zero emissions, hydrogen-powered RV1 between Covent Garden and Tower Bridge. In order to reduce dangerous emissions at the rate we need, I would do everything I can to encourage people out of their cars.  In contrast – and against the pleas of green campaigners and local residents – Sadiq Khan has given the go-ahead to a new, pollution-generating motorway under the Thames at Silvertown.
The list of environmental failures doesn’t end there.  In his 2016 campaign, Sadiq Khan promised to plant two million trees in London if he was elected as mayor.  The reality, according to City Hall’s website, is far closer to a much less impressive 200,000.   And when it comes to waste management, recycling rates across the capital have remained stagnant at around 30% for the past four years despite Sadiq Khan’s pledge to increase this to 65%.
The hardest areas to address will be around the built environment and I hope that the Mayor and other candidates are honest with voters about what achieving a zero-carbon target will entail, including retrofitting our homes, offices and other buildings so that they are insulated and energy efficient.
The world is burning.  Our very future is at risk.  Londoners deserve more than warm words and empty promises on the environment from their mayor.  We need real action based on bold plans and that’s what I would bring to the job of Mayor of London.”

Prezzo is treating local communities to 15,000 free drinks, starters and...