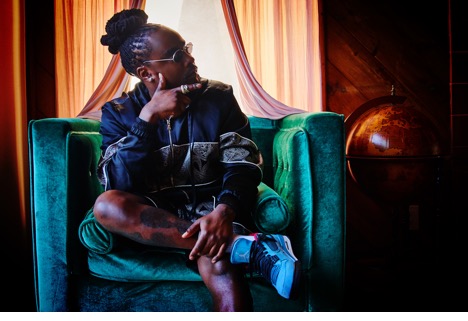 ReKTGlobal has today announced that groundbreaking rapper and lyricist Wale will kick off the opening night concert of the London Royal Ravens Home Series, the United Kingdom’s inaugural event for the Call of Duty League, bringing professional tournament-style esports, exclusive entertainment and behind-the-scenes access to fans and gamers. The GRAMMY® Award-nominated and platinum-selling artist joins the lineup with international DJ, Nicky Romero, for the concert on Feb. 8 at Copper Box Arena.

The Call of Duty League is a global, city-based esports league composed of 12 professional teams, representing 11 markets across North America and Europe. In its inaugural season, pro teams compete in 5-versus-5 Call of Duty®: Modern Warfare multiplayer matches, on PlayStation®4. The professional competition features the best Call of Duty esports players from around the globe, battling for the ultimate prize: The Call of Duty League Championship. The performances by Wale and Nicky Romero will cap off the first day of festivities and gameplay during the Royal Ravens’ first Home Series weekend.

“With Wale joining the concert lineup, the Home Series brings together the biggest artists in hip hop and EDM, plus the world’s best Call of Duty pro athletes,” commented London Royal Ravens Managing Director Michael ‘ODEE’ O’Dell, who also serves as Chief Gaming Officer for parent company ReKTGobal. “The inaugural homestand weekend for the London Royal Ravens is a can’t miss event with unforgettable performances, an action-packed esports tournament and lots of behind-the-scenes access for fans and the local community.”

Since his 2006 debut, Wale has consistently gone against the grain. An old school lyricist with new school energy, otherworldly hooks and a sense of irony tailormade for its own Seinfeld episode, he instantly set himself apart. 2008’s inventive Mixtape About Nothing cemented him as a critical favorite and preceded the major label debut Attention Deficit in 2009. Bowing at #2 on the Billboard 200, the now-classic and gold-certified Ambition yielded the GRAMMY® Award-nominated platinum-selling “Lotus Flower Bomb.” Two more blockbusters followed as The Gifted [2013] and The Album About Nothing [2015] both crashed the Billboard 200 at #1 back-to-back. Shine [2017] gave the world “My PYT,” which is RIAA certified platinum, as Wale continued dropping heat. Along the way, Wale covered magazines such as Complex, Billboard, XXL and Vibe, and would receive honors at the BET Awards, BET Hip- Hop Awards, Soul Train Awards and more. To date, Wale has achieved four platinum or multi- platinum singles, three gold singles and two gold albums. Wale continues to break ground with the release of 2019’s critically-acclaimed Wow… That’s Crazy, which includes #1 single “On Chill” featuring Jeremih. What’s more, Wale has accumulated over 7 million monthly listeners on Spotify and has reached over half a billion channel views on YouTube.

Wale also made history as “the first rapper to open the State Of The Union,” gracing the stage with an unforgettable performance before President Obama’s final State Of The Union Address. A regular guest of the First Family, he participated in First Lady Michelle Obama’s “Reach Higher” initiative for higher education as well. Expanding his cultural influence, Wale teamed up with Villa for a limited-edition line of sneakers. These included the Asics “Bottle Rocket,” the Timberland “Gift Box Set” and the VILLA x Wale x ASIC Gel Lyte III “IC Champion.” Wale’s label imprint, Every Blue Moon, encompasses the scope of his creative vision with musicians, comedians and screenwriters under its umbrella.

The London Royal Ravens event will kick off a tournament-style format that is familiar to the legacy of Call of Duty esports and former Call of Duty World League format, which featured pool play followed by a playoff bracket. Coupled with a new points system, the updated format will deliver an impactful, competitive experience for all. In addition to the hometown London Royal Ravens team, the Home Series weekend will feature the Chicago Huntsmen, Dallas Empire, Los Angeles Guerrillas, New York Subliners, Paris Legion, Seattle Surge and Toronto Ultra.

To attend the Home Series events and cheer on the London Royal Ravens as they compete to reign over the weekend bracket and add to their individual season point total on the road to the championship, visit https://royalravens.seetickets.com/tour/call-of-duty-league-royal-ravens.

Hieroglyphics designed by Chessington World of Adventures Resort have replaced the...