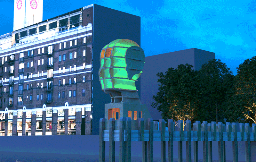 As part of the London Design Festival (15 – 23 Sept), and designjunction (20-23 Sept), British designer Steuart Padwick will make a dramatic change to the London skyline in support of mental health and the anti-stigma campaign, Time to Change.

Head Above Water is a 9 metre high, interactive sculpture on London’s South Bank with panoramic views of St Paul’s Cathedral and the iconic city skyline. Taking the form of a giant wooden head elevated above the Thames, this striking and powerful piece will inspire and spark debate.

“A bracing, bold intervention into the city’s skyline. A clarion call to remember our humanity from the banks of the most beautiful city on earth,” Simon Stephens (Playwright)

The ‘Head’ is deliberately gender, ethnicity and age neutral and stands as a symbol of hope, bravery, compassion, positivity and change, for those who have come through or are still confronting mental health issues, and the people who support them.

This captivating piece of public art supports Time to Change, the hard-hitting campaign to end mental health stigma and discrimination. One in four people will experience a mental health problem in any given year, yet many people still report being misunderstood by those around them. Time to Change believes the dynamic platform will help challenge negative attitudes and stimulate discussion around mental health.

At night Head Above Water will be lit, and people will be able to engage with its changing colours to reflect how they are feeling through a designated Twitter feed – in real time.  Dr Sally Marlow Phd, Engagement and Impact Fellow, The Institute of Psychiatry, Psychology & Neuroscience (loPPN) at King’s College London has advised on the changing colours to reflect different narratives and concepts used to describe emotions. Consulting engineers Hoare Lea are the specialists behind the lighting scheme.

The British designer/sculptor, Steuart Padwick said, “Head Above Water is a symbol of hope. It needed to be big, powerful and prominent… a beacon of humanity caring for others.  This is not my head or about my battles.  This is for those who have or have had mental health issues…. I want anybody and everybody to relate to it….to open a door perhaps ….”

Jo Loughran, Director of Time to Change said: “Located on the bustling South Bank, Head Above Water will be seen by millions, prompting contemplation and encouraging conversations about mental health. Sadly mental health problems are often confined to hushed conversations in quiet corners so we’re excited to support this project which proudly brings it into the light.”

Dr Sally Marlow PhD , Fellow at The Institute of Psychiatry, King’s College, said, “This is an extraordinary piece of public art, Head Above Water’s powerful use of colour reminds us that mental health comes in many guises, and can be a story of hope, not despair.”

Autism’s Got Talent to wow British audiences this summer

Works by X-ray artist to be unveiled in London

Guide to Starting to Accept Credit Card Payments for Your Small...