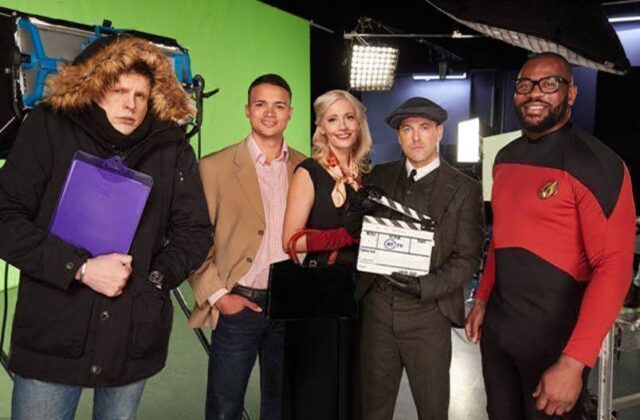 To celebrate today’s launch of its exciting new range of flexible TV packages, BT has today released behind-the-scenes footage of BT Sport presenters ‘auditioning’ as characters from some of their favourite TV shows for the new BT TV trailer.

The footage shown on Essex Magazine sees BT Sport presenters Jake Humphrey grapple polar bears in the wilds of arctic Norway, whilst the marvellous Lynsey Hipgrave takes a break from presenting to try her hand at stand-up comedy in full 1950s glamour.

Despite the wealth of talent on display, it’s clear not all BT Sport’s stars are suited to their new acting roles, as Ugo Monye struggles to rise to the occasion on an intergalactic space mission, whilst Jermaine Jenas is left feeling disappointed with his less than “grand” sports car as he attempts to play out his dream presenting role.

There’s a glimmer of hope as former England and Aston Villa attacking midfielder Joe Cole plays a blinder, settling into his role as a Birmingham gangster, wearing his flat cap with pride, but ultimately, he can’t stay away from what he does best…talking about the beautiful game.

Luckily, fans can enjoy all of their favourite shows without BT Sport’s expert pundits’ attempts at stardom, with the new 24-month flexible TV packages which offer BT TV customers the freedom to choose the TV shows, films and sport they want – with the option to change their package every month.

As new research reveals the average adult spends seven minutes searching across different TV channels and services for their favourite shows, BT TV’s new service makes finding and watching the best programming simple. Customers can watch Sky Atlantic, hundreds of box sets, the latest must-see movies and live sporting action on Sky Sports all from NOW TV, BT Sport in 4K, Amazon Prime Video and Netflix in 4K – with integrated search, all in one place; one box, one remote and one bill.

BT’s research also reveals that over 50 per cent of Brits are frustrated at having too many places to watch the shows they want to see, and a third say they forget which service the show they want to watch is on.

The new 24-month flexible TV packages and content add-ons are available immediately for and are created to help customers choose the right TV line-up that best suits their needs. With package prices starting at just £10 a month, customers have the flexibility to upgrade, downgrade, and add their favourite services to enable their TV to adapt to changing lifestyles month-to-month.

IT Management Best Practices to Protect Your Business from Data Breaches

IT Management Best Practices to Protect Your Business from Data Breaches