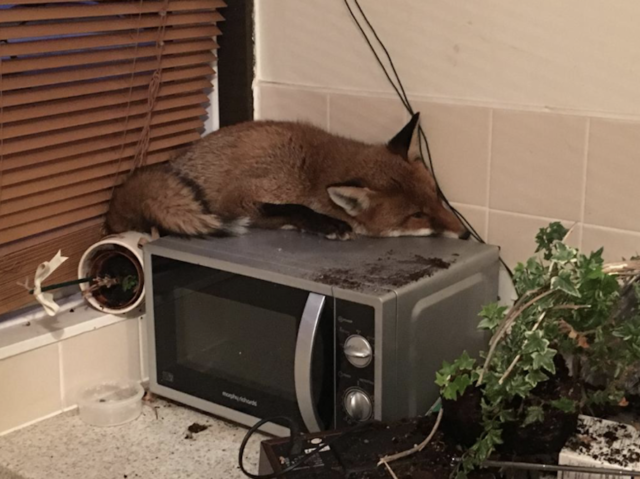 A Mitcham family had quite the shock when they came down to the kitchen early one morning to find a FOX asleep on top of the MICROWAVE!

Kim Fryer was at home in Rawnsley Avenue on 15 December when her daughter discovered the fox early in the morning.

Kim said: “My daughter found him at 7am and called up to me. I came down and spotted this little fox curled up on top of the microwave!

“I have five cats and a dog so obviously I have a cat flap. He must have crawled under the gate and through the cat flap!

“A couple of my plants were smashed and there was mud everywhere!

“She put the light on and one eye opened but he didn’t move. We could tell there was something wrong with him.”

They called the RSPCA and Inspector Phil Norman attended to collect the fox.

He was taken to the charity’s Putney Animal Hospital, in London, where vets checked him over and monitored him.

While he seemed extremely weak and lethargic to begin with he soon perked up and staff could find nothing wrong with him.

Greenpeace change Westminster road signs so that all roads lead to...

Leicester Square will come to life with a trail of dynamic...