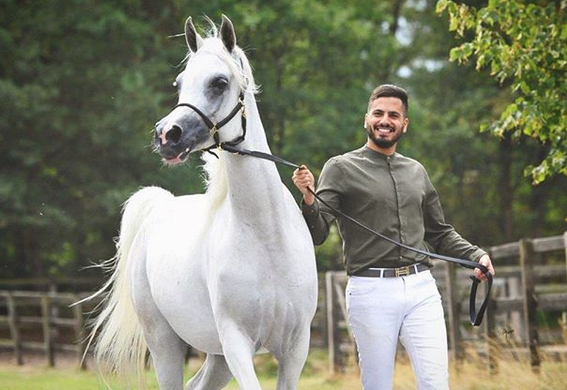 When it comes to business, Mohammad Sheikh Suliman has spent a number of years proving his worth. His investment selections have been sound and based on his thorough understanding and constantly expanding knowledge of the business world and different industries. However, his Arabian horse breeding venture has become his most well-known success and after just two years Suliman carved his own space at the top of the horse breeding community.

Born in 1990, Suliman earned his first bachelor’s degree in 2005 and got to work immediately in the world of business investment and entrepreneurship. After some 10-or so years gaining confidence and clocking up positive results, his mind turned to a passion of his own: horse breeding.

Building on his achievements in the world of business, Suliman took the decision to create a new equine breeding stud, the Al Sheikh Stud. With the support of hand-picked experts, he set out his vision and selected his first stallions to begin his breeding programme.

While many breeders would be satisfied with so much recognition in just two years, Suliman chose to seek even more success with his stud programme. While this led to some new additions to the Al Sheikh Stud, it also included improved results for some of his existing stock.

Royal Lavita Bella, was named gold champion senior mare while Algamra took the equine world by storm and only improved as she matured into a fine filly. Equator, meanwhile, remained a favourite and also gained further gold and silver cups during showing.

Suliman and his trainer Raphael Curti continue to add the right Arabians to their stable as they seek to further improve the bloodline of their already impressive beginnings. There’s no doubt that Suliman’s passion and vision will ensure even more excitement in the equine world when they see the future results of the Al Sheikh Stud breeding programme.

On The Tools pick up the People’s Choice Awards at Pitch@Palace...

New dating app Doggr. is set to get tails wagging