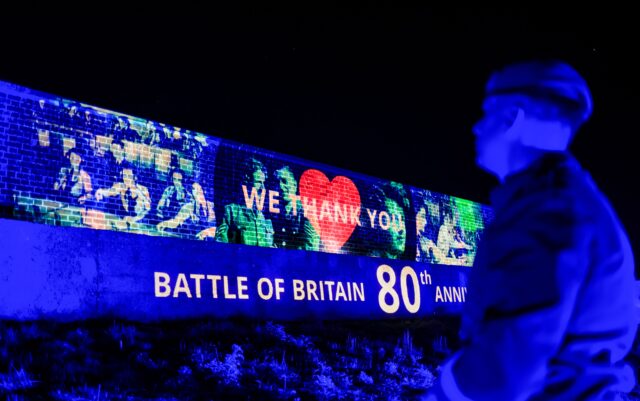 As we all mark the 80th anniversary of the Battle of Britain, the RAF Benevolent Fund is working to highlight the role of the many who each played a critical part in securing victory. Many of them lived and worked in the East of England, home to not just airfields but also other critical installations such as radar. Others in the region may recall seeing the dogfights in the skies during that summer of 1940.

To pay tribute to all those who worked towards victory, we created a poignant light show projected onto two radar sites with images of a range of RAF personnel from air crew to radar operators. These help remind us of the many who supported the few, not just during the Second World War, but right up to the present day.

The RAF Benevolent Fund is there for the many – anyone who has EVER served in the RAF. We have a duty to support them in their time of need. We all have a last chance to do our duty, just as they did theirs, by giving them and their families the support they deserve.

In 2019, the RAF Benevolent Fund spent £1.4 million supporting 270 beneficiaries in the East of England – but we know there are thousands more veterans out there in need of assistance.

Given the important role the RAF has played in the recent heritage of the region, we ask your readers to think if they know of any RAF veterans or their partners who may be in need of our support, particularly during this difficult time. We can help them in so many ways.

To find out more or let us know of someone we might be able to help, please visit www.rafbf.org.

Everything we know about upcoming film Cancer’s Last Stand

The Prince of Wales to hold British Red Cross reception at...