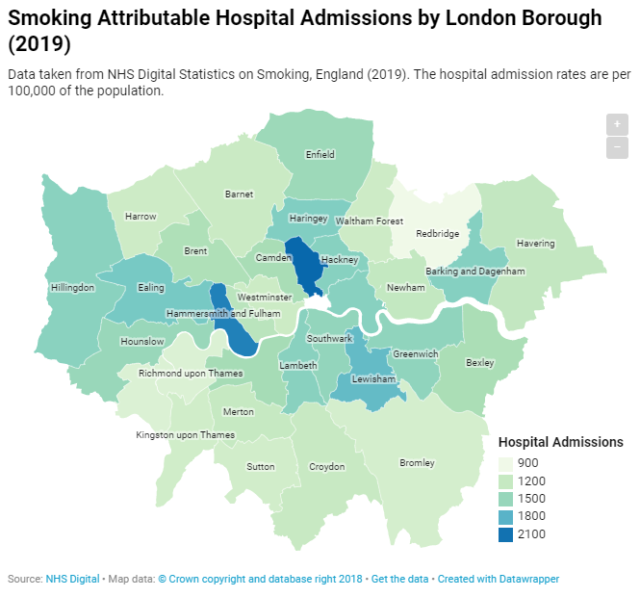 How does London compare to the rest of the UK?

Take a look at the smoking attributable hospital admissions for the UK on the map below. The England average is 1.5% and many of the London boroughs are well above the UK average. 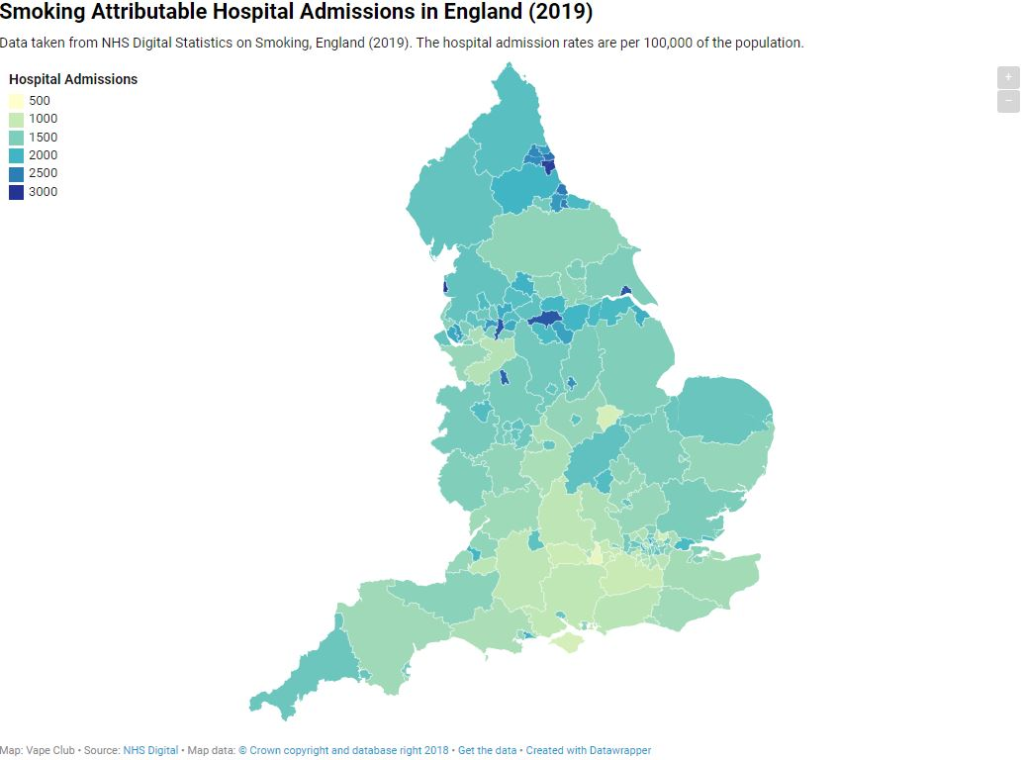 A burden on individuals, the NHS, and the UK economy and society

In fact, while smoking rates in the UK are declining, hospital admissions related to smoking are rising, and there is a concerning trend of cuts to smoking cessation services.

The British Lung Foundation found in July that the number of GP prescriptions for nicotine replacement therapy (NRT) in England has fallen the past decade by 75%.

The scale of the problem

With a staggering 22.4%, Barking and Dagenham has the highest smoking rate in London and the 18th worst rate of any region nationwide. The second highest ranking area in London is Tower Hamlets (22.4%) followed by Newham (18.2%).

Alongside the smoking rates, the UK NHS stats continue to be bleak:

Making quitting smoking easier and more affordable
Havering has the worst ‘quit rate’, with 0.11% (almost two thirds fewer than the England average) of smokers using the service successfully quitting. Sutton, while an area with average smoking prevalence, also has a woeful ‘quit rate’ of 0.54%. Hillingdon is the next worst performing with 0.75% successfully quitting.

Despite these struggling regions,, NHS services across all of London recorded a 2.28% ‘quit rate’ beating average achieved across England (2.19%).

Public Health England say e-cigarettes were 95% less harmful than tobacco and using an e-cigarette with stop smoking service support can double your chances of quitting. The question that remains is how the NHS can start to engage with vaping as a stop smoking aid. One solution could be to partner with an organisation like Vape Club to offer smokers trying to quit an initial discount – perhaps in the form of a voucher signed off by a GP – on vaping products.

Ultimately, stop smoking services in the Yorkshire and Humber region need more funding in order for costly smoking-related hospital admissions to decrease. If there are more cuts to these support services, this will not save money, but ultimately cost the NHS more in the long-run.

‘Vaping gives a real alternative to traditional smoking cessation products, and as the study shows they are actually twice as effective. It is fantastic to see organisations such as Public Health England and the NHS embrace the public health breakthrough that is vaping, but we still have a long way to go to get this message out to the remaining 7.4million smokers in the UK.’

Billionaire Investor James Richman Doubles Down on Crypto As Demand from...