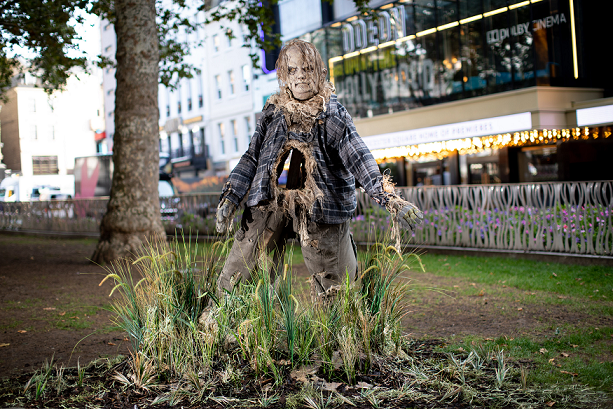 Londoners in Leicester Square were left shocked when a terrifying scarecrow came to life.

Appearing overnight on the lawn in Leicester Square gardens, the monstrous scarecrow with decaying face, sprouting straw and a spear clearly visible through a hole in his stomach, attracted the attention of commuters and tourists.

Those daring to go close enough to inspect the lifeless structure were given the fright of their lives when Harold burst into life. It transpired this was in fact a clever illusion created with the combination of a specially made prop, prosthetics and a very flexible actor.

The scarecrow is an almost exact recreation of the character Harold in the highly anticipated new horror Scary Stories to Tell in the Dark, a terrifying vision of Oscar-winning producer Guillermo Del Toro (Pan’s Labyrinth, The Shape of Water) and director Andre Øvredal (Troll Hunter, The Autopsy of Jane Doe).

Harold continued to terrify passers-by in the capital throughout the morning, with some even brave enough to capture a selfie with him.

51% of Britain admit that they stress about the cleanliness of...