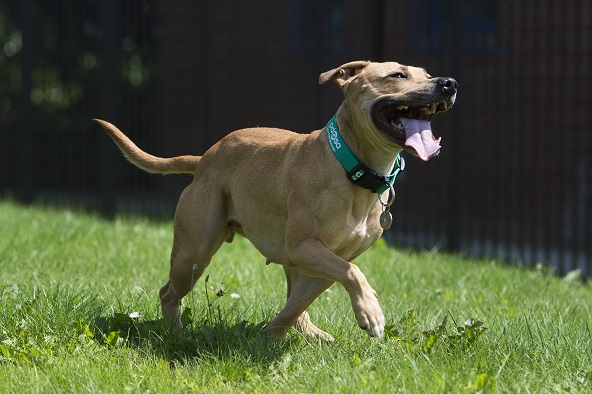 PDSA wants to hear from any miracle pets in London for its unique Pet Survivor awards, which have just opened for entries this year.

Last year’s finalists included two pets from the capital city – Brandy the Staffie and Skittles the cat. The competition is open to any pet in the UK that has been treated for a life-threatening illness or injury. Enter online at www.pdsa.org.uk/petsurvivor

Brandy, from Shooter’s Hill in South East London, nearly died when a game of fetch went disastrously wrong, and an 11-inch stick impaled her through her throat and chest. She was lucky to be alive, but left with horrendous injuries. She received emergency surgery at Thamesmead PDSA Pet Hospital and after several operations and months of rehab, eventually making a full recovery.

Skittles, a ginger cat from Neasdon in North West London was found impaled on railings, but was miraculously still alive and conscious. After being cut free by fire fighters, she was taken to RSPCA who were able to remove the railings. After further operations at Hendon PDSA Pet Hospital the adventurous moggy made an incredible recovery.

Brandy and Skittles were both selected as finalists for Pet Survivor 2018 and went forward to a public vote. The competition was eventually won by black cat Dexter, from Cornwall, who was crowned PDSA Pet Survivor of the Year 2018. He was through the mouth in a deliberate airgun attack.

Surviving this shocking act of cruelty was a miracle in itself, but he was also left with a fractured jaw and a hole in the roof of his mouth, requiring, several operations, and months of treatment and recovery.

PDSA Vet Olivia Anderson-Nathan said: “Dexter received the coveted title of Pet Survivor to recognise his incredible survival spirit, his owners’ dedication, and the skill and expertise of all the vets and vet nurses who helped to save his life. We’d like to hear from anyone whose pet has an extraordinary story of survival against all odds, or who has cheated death by a whisker.”

The winner of PDSA Pet Survivor 2019 will be decided by a public vote later in the year. They will receive a trophy, plus a luxury pet hamper worth £200, provided by this year’s sponsor Petsurance from PDSA.

Other previous winners include Darcy, a working Cocker Spaniel from Dundee, who fell down a 60ft dam, leaving her with a fractured pelvis, two broken legs and multiple other injuries. She won the award in 2016 after going through months of rehabilitation before she was able to fully recover. In 2015, the award was won by Staffie Ziggy, who miraculously survived being shot in the head with a crossbow.

The awards are open to any pet treated by a vet in the UK for a life-threatening illness or injury between 1 August 2018 and 31 August 2019. Pet owners wishing to nominate their pet can enter online at www.pdsa.org.uk/petsurvivor. The closing date is Sunday 8 September 2019.

“MY FACE WAS ON FIRE” – London man warns others about...

Matt Graham, a British writer talks about the dark and disturbing...