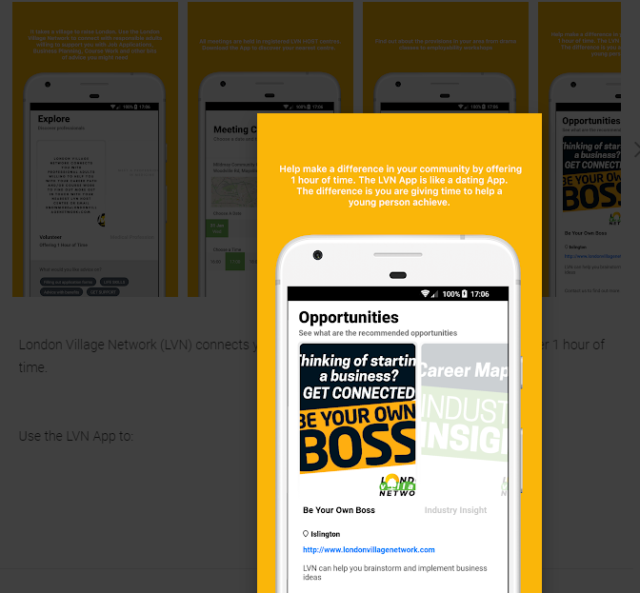 The London Village Network ‘Poverty Network’ model is backed up by Liverpool John Moore lecturer in Criminal Justice, Dr Robert Hesketh. His research states that ‘gang culture appeals to disenfranchised young people but ‘social mixing’ offers a way out’. This principle has been LVN’s mantra since the charity was formed in 2015. He comments, “Our theory of change outlines that if young people have access to better networks they are less likely to fall into anti-social behaviour and criminal activity” explains Rachael. “What parent is not concerned about the safety of their kids? With knife crime a constant threat to us all whatever our background, what LVN offers less-privileged young people is more relevant than ever.”

Rachael has used technology to realise her vision and is delighted that her work has just been recognised by selection as a finalist at the 2019 Tech4Good Awards: “Our model is simple and cost effective. We ask responsible adults to donate just 1 hour of their time ‘The Power of an Hour’ to bring networks usually only afforded to the middle classes to disadvantaged youth living in deprived communities.”

Rachael founded LVN in 2015 after a group of boys were involved in anti-social behaviour outside her flat. Rather than do nothing or call the police, she decided to intervene. Identifying that the group had limited networks. She helped introduce them to networks, identify opportunities and access local youth services. Word spread. This was the start of LVN’s journey, Rachael began to help young people from different parts of London find work. In the face of growing demand, she had to find a more efficient solution to channel requests for help and offers of support – the LVN app was born. App enabling technology that allowed LVN to grow and reach more young people in need.

“Frontline services are losing the battle with disengaged young people. Resources are stretched and young people are suspicious of authority. We need to offer an alternative to youth to help tackle the knife crime epidemic” explains Rachael, setting out how she worked with behavioural scientists at Ogilvy Change and educationalists to develop a series of programmes to maximise adults giving just 1 hour of time via the app.

“One hour might not sound much but collectively 10 interactions can be transformative. Our next step is to increase capacity on the streets, to train more youth and frontline community workers on how to deliver our model and increase use of the app.  Our vision is to create a system where young people on every estate have access to positive networks and support. I’d like to invite any youth provision in London, and potentially beyond, to get in touch to find out more”.

With Google Director of Software Engineering, Catherine Ruggles, joining the LVN Board of Trustees, the charity is perfectly positioned for growth. All the ingredients for growth are in place. “Rachael is the embodiment of a social tech entrepreneur. Someone with a big vision for Community Cohesion starting out with limited knowledge of tech but with the foresight to employ it to great effect” praised Catherine. “I’m looking forward to driving further development of the app. All the ingredients are in place, LVN now has the expertise and the platform to upscale its model across London, and eventually beyond.”

London Village Network’s message is being heard and making an impact. Alderman William Russell (who subject to election) is the next Lord Mayor of the City of London, comments: “I am delighted London Village Network has been shortlisted for the Tech4Good Awards. I met founder Rachael Box recently and was inspired by both her passion and purpose and am happy that her work has been recognised in this way. She’s developed a simple but effective model for social change, underpinned by app technology that enables less privileged young people to access positive, potentially life-changing networks. Networks that I am convinced will help enrich and empower young people to reach their full potential.”

That the value of the app is being recognised is evident by the growing number of prestigious organisations listing their youth services on it. Dr Angela Herbert MBE, Chair of the Violent Crime Prevention Board, expressed her enthusiasm for the app, “I hope that more organisations will add their services to this useful resource which I’m promoting through our own VCPB.org website. It’s imperative that young people know what support is available.”

“Connecting communities and people through technology is something we feel incredibly passionate about at Samsung”, says Jessie Soohyun Park, Senior CSR Manager at Samsung UK. “LVN not only provides a tech platform that connects disadvantaged young people, but it inspires them to engage, learn and be part of a much bigger network than they could ever have imagined possible. Samsung is proud to be associated with this important social mission.”

London Village Network is marking Tech4Good by launching its first ever crowd-funder and Rachael is hoping the community will get behind the project and pledge support. LVN’s message is clear: “Across the country communities are crying out for change and support. LVN is designed to deliver this. It’s vital that we unlock access to networks to help young people find their purpose and meaningful employment opportunities. It really does take a village to raise a child. Please don’t feel helpless, get involved.” appeals Rachael, who is hoping that people will back the LVN solution by pledging support on its crowd-funderhttp://crowdfunder.co.uk/supportlvn”

50% YO! discount for those working in the NHS, Emergency Services...